Find the Fountain of Imperium so he can become all-powerful.

Aleister Crowley is a supporting antagonist in Season 6 of the TV series DC's Legends of Tomorrow. He was an influential occultist who eventually died and his soul was sent to Hell. However, his soul was later resurrected by John Constantine and then trapped within a painting, leaving him longing to get out and find the Fountain of the Imperium so he can become all-powerful.

He is voiced by Matt Lucas, who also played Otto Hill in The Harry Hill Movie, Charlie in the UK version of The Queen's Corgi, Mr. Collick in Missing Link, Mr. Blut in Polar and Chancellor Donold David Dongalor in Kröd Mändoon and the Flaming Sword of Fire. Whilst possessing Constantine, he is portrayed by Matt Ryan.

At some time in his life, Crowley studied human and alien magic, and became an occultist, mystic, alchemist, writer, poet, painter, mountaineer, and ceremony magician. After his death, Crowley's soul went to Hell. Years later, John Constantine summoned Crowley's soul to learn what he knew about the occult and then trapped him on Earth in a painting stored in the attic of his house. Constantine kept one of Aleister's book about alien magic and Gary Green enjoyed reading it, taking it from the bookshelf in the house's library and holding it in his room.

Crowley kept teaching Astra the possibilities of using the Permuto and they both dressed in fancy clothes for the occasion and Crowley started teaching Astra more magic. He stopped John and Astra's discussion to speak to Constantine alone. Crowley revealed to John to use Astra's powers to be able to reach the great Fountain of the Imperium and obtain the most powerful magic, but Constantine did not believe that the fountain was real, and an angry Crowley took Constantine to the attic so that he would not interfere with his plans.

After locking up Constantine once more, Crowley went with Astra to create an amulet that will have all the magic possible and to finish it they should steal a soul and Astra suggested using the racist neighbor Robert Truss. Since Astra still had a good heart, she tried to take Truss away, but Crowley interfered and stole Truss's soul. Disappointed in Astra because she was a good person, Crowley betrayed her and became more powerful thanks to the amulet, meaning no spell could harm him and with his powers changed, the reality into an animated reality.

Crowley confronted Astra and the Legends, who became objects, but were no match for him and locked up the Legends, planning to steal their souls. He was surprised by Astra, who chanted a spell to remove magic created by her mother and Crowley started losing his powers. Crowley confronted Astra and turned into a giant demon to try and defeat her, but he got too tired and lost all his powers, returning to painting and everything returning to normal. He was locked by John back in the attic and Crowley still wanted to find the Fountain, but John refused to work with him after what he had done.

However, after John became uncomfortable with being powerless, he went to see Crowley for help since he was the only person who knows about the Fountain's location. Crowley told John everything there was to know about the Fountain, and he would have to go a long way if he wanted to regain his magic, and explained to him about the map to get there. After returning to the house, Esperanza Cruz started pestering Crowley until John sent Esperanza upstairs. John then had a vampire banker named Noelle take Crowley's painting in exchange for some magic potions that would give him brief magic. Crowley ranted how his trials and tribunals will be blamed on him alone. 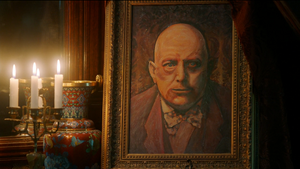 Crowley in his painting. 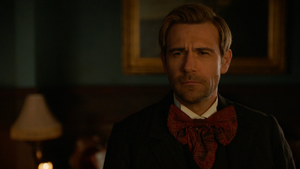 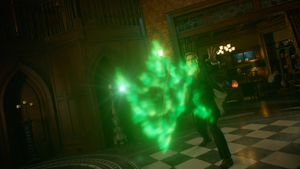 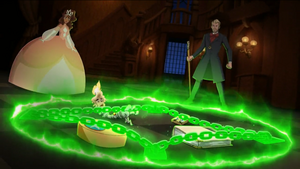 Astra and the Legends vs. Crowley. 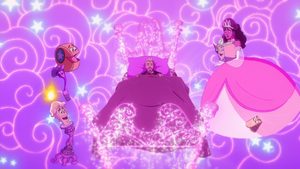 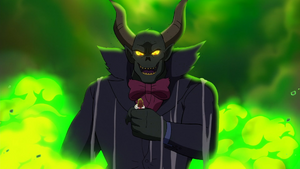 Crowley as a demon trying to defeat Astra.