Observing the actions of Celestial Being.

Take over the control of Veda.

Rule the world in his own path.
Destroy Celestial Being.

Hegemonic Mastermind
Alejandro Corner is the main antagonist of the first season of Mobile Suit Gundam 00.

He was voiced by Yasunori Matsumoto in Japanese and Andrew Kavadas in English.

Alejandro is the diplomat of the United Nations and a supporter of Celestial Being. However, he eventually plans to take over the Veda for his own benefit. Arrogant and power-hungry, he desires to lead the world in his own vision. He also seems to like the colour of gold very much, as his gun, pilot suit and even his custom Mobile Suit is in the colour gold.

Eventually, Alejandro decided to choose the Kingdom of Azadistan, which is suffering from economic, political and energy crisis, for the United Nations to help to build their Solar Energy Receptor Facility, as he believed the country deserve chance of change.

He witnessed Setsuna in his Gundam destroying Mobile Suits, he wondered if Setsuna, who over rely on the brute force of Gundam can really represent the Gundam. Soon, the leader of the conservatives is rescued by the Celestial Being, Alejandro witnessed Setsuna bringing the leader to the Azadistan Palace without any conflict.

When the three power blocs of the world decided to work together to defeat the Celestial Being, which end in the defeat of the four Gundams, however, they are soon rescued by Team Trinity. Since Alejandro didn't know their existence, he quickly called a meeting with other Celestial Being observers, they all agree with letting the Team Trinity to join Celestial Being to strengthen their power.

Alejandro soon gave the technology of GN-Drives to the power blocs, which lead to the development of the GN-X, which has power that come close to the Gundams.

However, the Celestial Being didn't agree with the violent method of Team Trinity, so a fight soon broke out between them. Alejandro interfered the battle by having Ribbons to delete Tieria Erde's Trial System. Alejandro also acquired the location of Veda: Behind the Moon. He and Ribbons went to there and had Ribbons to hack into Veda, he disconnected the connection of the Celestial Being's Gundams and the Veda, thus disabling them during their battle with UN force. However, the tactician of Celestial Being, Sumeragi Lee Noriega had a backup plan and thus allows the Gundam to act independently without Veda.

At the same time, Alejandro also murdered other Celestial Being observers and had the mercenary Ali Al-Saachez to kill Team Trinity, Ali sucessed in killing Johann Trinity and Michael Trinity, however, Nena Trinity was saved by Setsuna.

Soon, Alejandro reached the capsule of the founder of Celestial Being, Aeolia Schenberg, Alejandra told him that he won't be able to see the world change as he killed Aeolia with his gold pistol. However, the death of Aeolia activate the Trans-Arm system, thus catching Alejandro off guard. Alejandro then angrily prepares his last obstacle of Aeolia's plan.

In space, Alejandro assisted the UN Force in defeating the Celestial Being by soriteing in his Alvatore, which is powered by seven GN-Drives. With Alvatore's heavy fire power, Alejandro was able to heavily damaging the Ptolemy, resulting in the death of Joyce Moreno. Setsuna and Lasse ,in the Gundam Exia and GN Arms respectively to combat the Alvatore, although Setsuna defeated the Alejandro/Alvatore, this cost him the GN-Drives and Lasse is unable to continue the battle. Alejandro then revealed his last card, the Alvaaron and fought Setsuna. However, Alejandro was no match for Setsuna and the Alvaaron is ultimately destroyed, thus defeating Alejandro finally. Fatally wounded, Alejandro receive a message from Ribbons, who betrayed him and took over his plan. Realized that he had been betrayed and manipulated, Alejandro angrily punched the screen that showed Ribbons's face just before the Alvaaron exploded, killing Alejandro for good. 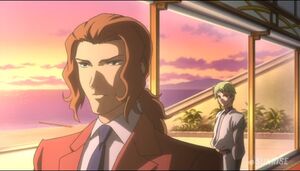 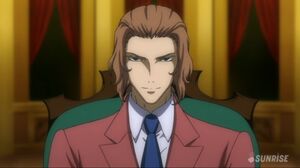 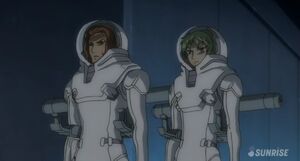 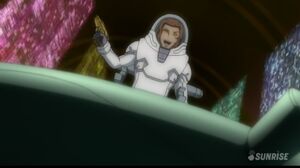 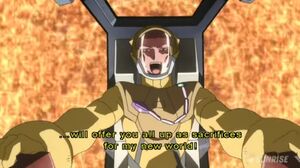 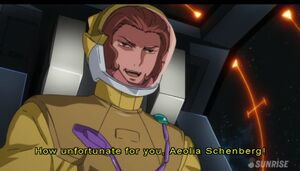 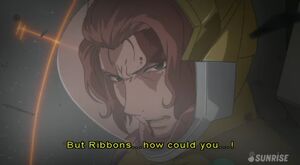 Alejandro realized that Ribbons betrayed him. 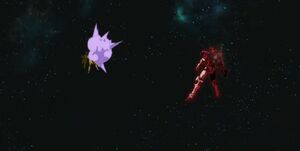