Dora and the Lost City of Gold

Treasure hunter
Leader of his mercenaries

Obtain the statue of Parápata (failed).

Professor Alejandro Gutierrez is the main antagonist of the 2019 Nickelodeon film Dora and the Lost City of Gold, which is based on the animated series Dora The Explorer.

He is a professor of the National University of San Marcos in Peru and a treasure hunter who appears as an old friend of Elena and Cole Marquéz who helped their daughter Dora, as well as her cousin Diego and their two friends Sammy and Randy, find Parápata. However, he is secretly the leader of a group of treasure hunters seeking a golden statue from the ancient city and has actually never been friends with Dora's parents.

He was portrayed by Eugenio Derbez, who also played Chato in The Book of Life.

Alejandro has dark sun-tanned skin and a trimly shaped beard and mustache with slightly curling dark hair. He wears a white cabana hat with a black ribbon ban, a blue neckerchief with white flowers printed on it, a beige button-down shirt and an open faded green jacket. He carries a hardy-looking brown bag to carry his equipment.

Alejandro is a greedy and egotistical man who worked with mercenaries in order to get his hands on the treasures of Parapata. Despite his seemingly benign nature, Alejandro is shown to be a master manipulator willing to abandon a group of teenagers to danger to reach his own ends. He lied to Dora about knowing her parents after pretending to "rescue" them from the band of mercenaries. In truth, he was working with those mercenaries and only freed Dora so she may lead them to her parents and the city.

Alejandro first appears when Dora, Diego, Sammy, and Randy were kidnapped by the mercenaries Powell, Viper, and Christina X in a museum and brought to the Amazon. He breaks them out of the crate they were trapped in and helped them escape, but Swiper the Fox manage to steal Dora's map on Powell's orders.

After the escape, Alejandro reports that Dora's parents have gone missing and that the mercenaries are searching for them in hopes of getting into Parapata and stealing its treasures. The group travels through numerous obstacles, including quicksand, Inca ruin puzzles, and attacks from the Lost Guardians of Parapata. Eventually, Dora reaches her parents just outside the borders of Parapata, and Alejandro reveals he was working with the mercenaries.

Dora and the other teens are captured by the mercenaries, but Boots helps them escape where Dora yo-yo's Viper. Alejandro and Powell find that Dora and her friends escaped and that Viper had been hit with a yo-yo again. With Dora's parents still prisoners, the teens decide to find the way inside Parapata in hopes of acquiring treasure that they can use to bargain for Elena and Cole's release. Dora and the others solve its temple's puzzles and dodge its traps, bringing them to the center shrine. At this point, Alejandro reveals that he was following them, presents gold to the final puzzle, and attempts to steal its statue himself, but instead triggers a trap and almost falls to his death into a pit of lava. The Lost Guardians arrive, defeat his mercenaries, and pull Alejandro out of the trap. They then confront the teens, but Dora speaks to them and presents water to the final puzzle, assuring that the teens only came for her parents and to learn. The Guardians allow the teens and Dora's family to leave, allowing them a glimpse of their greatest treasure as Alejandro is taken away. Swiper takes it and nearly destroys the lost city, but Dora manages to return it to its rightful place.

During the credits that has the characters singing a variation of "We did it," Alejandro is chained to a table and is fed cooked insects as he sings "Can someone get me out of here?" As he eats the insect, the soldiers overseeing him sing in their language which is translated in subtitles "You'll be here for a thousand years." Unless magic is involved, Alejandro will most likely not be alive by the time his sentence is complete. 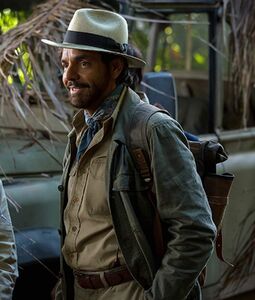 Alejandro with his hat on.