Help the Forsaken take over the world.
Kill the Requiem strike team (all failed)

Doctor Aleksandra Valentina (real name Angelika Hannabelle Vogel), is a major antagonist in the 2020 video game Call of Duty: Black Ops Cold War zombie mode, serving as the main antagonist of the map "Mauer Der Toten". She is a scientist of Omega Group who is working on developing weapons and technology from the Dark Aether, but it's revealed that her allegiance is to the Aether's master, The Forsaken. Despite her attempts in trying to bring her father's army from the Dark Aether, she was defeated by the Requiem strike team in Berlin.

She was voiced by Sadie Alexandru.

Angelika Hannabelle Vogel was born on January 6, 1944 in Nazi Germany to Dr. Ulrich and Maria Vogel, and her mother died from giving birth to her. Ulrich was the head of Projekt Endstation, a secret project created to produce war armaments for the Second World War, which resulted in the Dark Aether dimension being opened. He would enter the dimension with an army to await for their return, and Angelika was taken care of by her father's colleague, Dr. Lukas Kurtz. She would have her name changed to Aleksandra Valentina when Kurtz was given a new identity after being captured by the Soviet Union, and the Soviets saw the child as Kurtz's daughter. As a child, Angelika encountered a mysterious entity called "The Forsaken" that took the form of Ulrich, and manipulated her into believing that she was destined to bring his army from the Dark Aether.

During her youth, Angelika wanted to pursue academics but Kurtz refused, as he didn't want her to follow in Ulrich's footsteps and see the horror of the Dark Aether. She interpreted his refusal as not wanting her to have a proper education, and would sneak into his library every night to study science. In 1960, She received a acceptance letter from Moscow Institute of Physics and Technology, but Kurtz burned the letter after Angelika spoke of finishing her father's work and quoted her father words. Believing that Kurtz had abandoned finishing Ulrich's work, Angelika poisoned him, but his death was labeled as a heart attack by the authorities. Vogel then went on to the Moscow institute, and graduated at the top of her class.

Around the 1970s, Valentina managed to be recruited into the KGB, but it's assumed that she falsified her records as an agent of the agency to become a member of Omega Group. She became the leader of Omega's Psychotronic Phenomena Research department, and earned the trust of the group's leader, Lev Kravchenko. In the early 1980s, she proposed to Kravchenko that Omega could benefit in recruiting DARPA manager William Peck into their ranks. When Kravchenko wanted to counter U.S. President Ronald Reagan's Strategic Defense Initiative, Valentina showed Omega film reels of Projekt Endstation, which resulted in chairman Viktor Chebrikov allowing Omega to weaponize the experiments at Endstation. Unbeknownst to Chebrikov and Omega, Valentina saw this as an opportunity to follow Ulrich's plans on returning his army from the Dark Aether.

In 1983, Valentina was head of Operation Inversiya, where Omega studied the Dark Aether and started developing weapons and equipment based on Aetherium, and trying to control the dimensional breaches that were spotted. The group were able to discover dimensional breaches across Vietnam, Baku, Venezuela, Namibia, and Thừa Thiên Huế, and she ordered units to locate the breaches across the Soviet Union.

Valentina first appears in "Die Maschine", appearing as a spectral ghost and speaking to Peck on forging a new future of the Soviet Union. When the CIA were noted of Endstation by Samantha Maxis, they sent a Requiem strike team to shut down the rift at the facility. Despite the loss of Endstation, Valentina and Omega continued with their research, but learned from Peck failed in stopping Requiem in rescuing Maxis from the Dark Aether. In "Firebase Z", Valentina physically appears in confronting Peck with Kravchenko, who proceeds to take one of William's eyes for his failure and cowardice.

In 1985, Valentina traveled to Berlin and opened a portal to the Dark Aether, and entered the dimension where she ascended into a different form by the Forsaken. The entity ordered her to lead his army onto Earth, but Kravchenko and Omega came to the realization that she was not loyal to the Soviet Union. Omega forced Requiem to enter Berlin and put a stop to Valentina's plans if they wanted the Raptor-1 pilot to survive, and the strike team managed to reboot the robot Klaus and create the inversion warhead needed to close the portal. Valentina attempted to stop Requiem by using her ascended new powers, but failed and was killed when her essence was put into the inversion warhead. 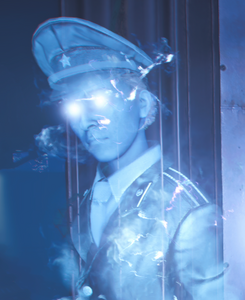 Valentina in the outro cinematic of "Firebase Z".