Alessi is a minor antagonist in JoJo's Bizarre Adventure: Stardust Crusaders. One of one of DIO's mercenaries and a member of the Egypt 9 Glory Gods, he wields the Stand known as Sethan, which represents one of the nine Egyptian gods of prosperity.

Alessi is a cowardly, sadistic, and treacherous mercenary who has a liking towards attacking some of society's most harmless and innocent, up to the point his first scene has him attack a group of children who made his pants dirty. Hired by DIO to kill Jotaro Kujo and his group, he is noticed by Polnareff, and just pretends to be looking for a coin. Polnareff attacks him, so a big shadow grows under him. Polnareff realizes it is a Stand and slices Alessi, who runs away. However, Polnareff starts de-aging, becoming a little kid. Due to this, Alessi shows himself and pursues him with an axe, and Polnareff manages to fend him off long enough to be saved by a female passerby. He is taken by the woman who gets him to take a bath, but as things starts getting interesting, he notices Alessi is the one bathing him, seeing only the woman's clothes and no signal of her.

Alessi tells she step in his shadow for too long, and Polnareff finally sees that she de-aged to the point she became a fetus. Alessi once again attacks by attempting to drown the tot, but Polnareff barely manages to fight back because of his tiny body, manages to disgust Alessi enough with his feces, and hide in a aquarium as Alessi charges into the room and starts his search for the infant hero. However, Polnareff still manages to deceive Alessi and get the drop on him as Jotaro approaches the scene, causing him to flee by crashing through a window Alessi later de-ages Jotaro as he comes to help (causing him to temporarily lose his Stand), but the young yet fierce Jotaro just punches him fiercely, still having his strength.

Alessi temporarily loses consciousness, deactivating his Stand, and restoring Polnareff, Jotaro, and the woman to their own selves. Immediately thereafter, Alessi is punished by both Jotaro and Polnareff by being ruthlessly attacked by both of their Stands, literally sending him flying. After this, he is never seen again.

Alessi's Stand, Sethan, manifests as a shadow under his feet. Anyone who steps in the shadow de-ages to a certain degree, depending on the time they are exposed to the shadow's influence. 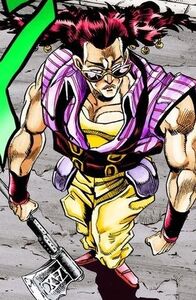 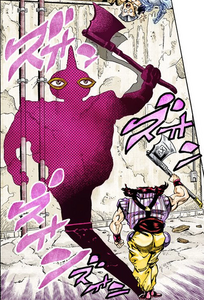 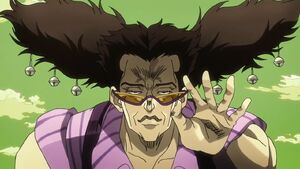 Alessi in the anime.

Alessi with his fellow Glory Gods.