Get revenge on Alex for treating them terribly (succeeded).

Alex's Droogs are an antagonistic group of young violent men who were led by Alex Delarge in the 1962 novel and 1971 film A Clockwork Orange. They all speak in Nadsat which is English that contains Russian and Early Modern English terms and phrases.

In both the novel and the film, the Droogs were first introduced sitting at the Korova milkbar and intoxicating themselves with "milk-plus" (milk that contains drugs such as LSD, synthetic mescaline, or adrenochrome) to sharpen them up for the evening of ultra-violence.

The men started their evening by beating up an old tramp. Next, they had a brief fight with Billy Boy and his men and quickly defeated them. They then stole a car and tried to run the other cars and pedestrians off the road. Finally, they came to the house of Mr. Alexander (a writer) were they beat him and raped his wife in front of him. After expressing discontent for Alex's petty crimes and for the events from the night before, the droogs demanded that Alex shows more equality with them so that they can make more money. While Alex and the droogs walked beside the flatblock marina (Binsey Walk), Alex attacked and threw Georgie and Dim into the canal and Alex reasserts his leadership (much to the droogs' annoyance). That night, Alex broke into the mansion of a wealthy old woman and even attacked the woman with a phallic statue in self defense. The police sirens are heard, and the droogs that were standing at the front door waiting for Alex then betrayed him with Dim smashing a milkbottle in his face and leaving the stunned and bleeding Alex in the hands of the police.

Georgie and Dim were the oldest members of the gang and they seem to be very close to each other. Georgie is Alex's second-in-command who attempted to undermine Alex's status as leader. Georgie was also outspoken, ambitious, and somewhat greedy. In the film, he wielded a Shillelagh (Irish Walkingstick) that he used as a club. In the book, he wields a Nozh (knife).

Dim was a slow-witted brute but was well respected by the gang for his muscle strength and fighting abilities. Dim even wielded a long chain length that he carried on his waist as a weapon.

In the novel, Georgie was killed during a botched robbery during Alex's imprisonment. In the film, Georgie and Dim were now police officers who at first rescued Alex from a group of Tramps. But after realizing Alex's appearance, it gave the two men the chance to exact revenge on Alex for all the torture he put them through while being under his command by taking Alex outside of town and half-drowning Alex in an animal trough while beating him senseless with their blackjacks dozens of times.

Pete was the youngest member of the gang next to Alex. In the film, he wields a Shillelagh to use as a club along with Alex and Georgie. In the novel, he wields a Nozh (knife) along with Georgie. He never spoke very much at times. The only times he spoke is when he agrees with his fellow droogs or whenever he tries to reason with them briefly. He was the most rational and least violent of the group. However, when it comes to ultraviolence, he was not afraid to show his violent and mischievous side of him.

He didn't take any sides with any of the other droogs and stays out of it whenever they fight amongst themselves.

Pete played a major part in the final chapter of the novel where he was happily married to a young woman named Georgina. He later met up with Alex and told him that he should think about starting a family and blend in with the rest of society as a normal citizen. However, in the film adaptation, for some reason, after Alex is released from prison, Pete was never seen or mentioned again, unlike the rest of the Droogs. Although it might be possible that he had the same fate as he did in the novel, having grown tired of his juvenile ways and blend in with society, although it is never confimred. 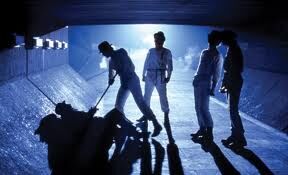 Beating up an old tramp 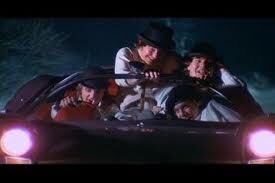 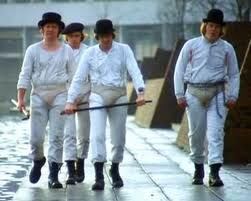 Walking by the Flatblock Marina 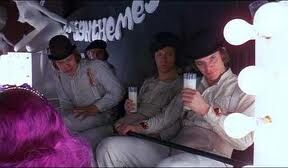 Cheers, O my brothers and sisters!