Assassin for the Ilian Church

Get Elisanne back to her side (Both failed)

Alex is a major antagonist from Dragalia Lost. An assassin sent by Ilian Church, she is also revealed to be a childhood friend of one of Euden's companions, Elisanne, and she is hellbent on purging several heretics who doubted the Scrolls of Perdition about Morsayati, being the child of Ilia herself while also trying to executing Elisanne due to her believes. However, towards the end of Chapter 8, she ended up becoming one of the main characters that helped the heroes in the main story and become one of the playable characters.

Alex is voiced by Ayaka Suwa in Japanese and Olivia Howard in English.

Alex is a young woman with short, blonde hair, red eyes and wearing a black hood to show that she is a stealthy shadow assassin. She also wears a grey-ish white shirt, black pants and boots and also wearing a brown belt pack and carrying a dagger in her own right hand.

Alex can be described as an aloof yet cunning assassin and a fanatic who believes the Scrolls of Perdition about Morsayati being the child of Ilia that was approved by the bishop and has no hesitations to kill all of the people that doubted the authenticity of said scrolls. However, she also had a twisted kind of believe as doing so would save the orphaned children so that they could not face a huge hardships that she had endured in the past. This truly makes sense as Alex herself was molded by Father Nikolai, a priest of Ilian Church, to become a murderous and cold hearted assassin that can get rid of the undesirables from the church and how her life was hard back then.

In addition of all of this, despite she tried to murder Elisanne after she renounce her faith, Alex still deeply cares towards Elisanne in her own way because of the fact Elisanne managed to save her from the alleyway, a place where she used to survive and was brought to the church while she was taught kindness and compassion by her and was disappointed to see Elisanne left the church. Even after seemingly betrayed by the person whom he put the trust on, Leonidas, he still indebted towards him in her own way. Towards the end of Chapter 8, Alex then learns the error of her ways and perform a Heel-Face Turn at the end of the day and joining the heroes side.

In the past, Alex was actually an orphan who endured a very hard life in back-alleys while also suffering several near-death experiences. Fortunately however, the Paladin of the Ilian Church, Elisanne, manages to rescue her from trouble and was brought to the church to be nurtured and taken care of while also taught by Elisanne about kindness and love. This resulted on Alex become hellbent to protect the church from any harm and prevent other innocent children meeting their suffering that she had endured in the past.

However, her relationship with Elisanne becomes a lot fractured due to the fact that the Scrolls of Perdition about Morsayati being Ilia's child was given a seal of approval by the bishop despite the documents itself being fake which causes a lot of shakeups in the church of Ilia. After Elisanne left the church due to the debacle that happened in the Ilian Church, Alex's personal paradise is seemingly destroyed.

As a result, Alex was molded and manipulated by one of the bishop of the Ilian church, Father Nikolai, to become a ruthless, cold-blooded and yet efficient assassin that is able to purge all of the innocent people from the church who doubted the Scrolls of Perdition that ended up being branded as heretics under the pretense that the church can become one again and Elisanne can come back again to her side. This causes her having no choice but to also kill Elisanne because of her renouncing her faith.

Alex makes her first appearance in Chapter 1 as a ruthless unnamed assassin that tries to kill Elisanne. Fortunately however, her actions was stopped by the heroes which resulted on Alex having no choice but retreated from the scene. She was mentioned again in Chapter 6 after Elisanne seeing Euden and one of his siblings, Valyx, have different ideals altogether which made her reminiscing about her past on leaving the church due to the debacle that was caused by the Scrolls of Perdition which fractured their relationships as a result.

However, Alex plays a major role in Chapter 8 where she and the ruler of Valkaheim, Leonidas, participated in a purge on eradicating the innocent believers of Ilian Church in Valkaheim who began to doubt the Scrolls of Perdition about Morsayati being the child of Ilia. This resulted on them evacuating themselves to the "Forsaken Way", an ancient caverns that sometimes people used as a shortcut to go to Valkeheim, to protect themselves.

When the heroes attempted to save the innocent people who were in the Forsaken Way, unbeknownst to them, Alex was following them all along while attempting to kill the surviving Ilian Church believers and Elisanne whom Alex now labelled them as heretics. Fortunately, Euden manages to stop her attempting to attack the remaining innocents. Despite this, she then goes to the inner chambers of Forsaken Way to kill the remaining innocent Ilian Believers that went further into the inner chambers due to them being bewitched by a dark haze.

Foiled by the heroes again after trying to kill the remaining innocent Ilian Believers that went further into the inner chambers, she was then saved by Leonidas who announces his alliance with Morsayati who possessed Zethia. When Leonidas was attacked by one of Euden's companions, Ranzal, in order to prevent him summoning his powerful dragon known as Mars, Alex decides to protects Leonidas from trouble as he supported the believes of the church. When Elisanne calls her out that she has been blind to Ilia's will, Alex still believes she did the right thing and then went further deep into the caverns with Leonidas due to Morsayati's body that was sealed in there.

When the heroes manages to trace Leonidas's whereabouts, Alex then orders the Imperial Army to attack the heroes in order to protect Leonidas. Annoyed by the charade, Leonidas then summoned his dragon and attacks the people who were near the radius of the dragon's attack. Despite Mars's powerful attack, they were saved by the flamewyrm, Brunhild, better known as Mym, herself who attempted to weaken the the flames of Mars to protect them.

After the seemingly betrayal by Leonidas and was fatally injured by Mars's attack, Euden attempts to heal her wounds with the help from one of her companions, Cleo, despite initially refused at first. As her wounds is treated, she then tells her dark past and her motivation to become an assassin. She also states that if she had no home to return to, it is another kind of death for her and has no hesitation to become a sacrifice, as it will ensure that the children that came after her will have better future. However, despite being treated well by Euden, she then returns to Leonidas's side in order to protect him.

As Alex participates with Leonidas to unseal Morsayati's body, both Euden and Elisanne tries to deliver a common sense towards her, empathize with her situation and persuading her into the side of good which in turn made her mind conflicted and resulted on accidentally attacking Leonidas. Seemingly betraying Leonidas, the latter then dismiss it as he already got a portion of Morsayati's power and with it, he summoned the manticore to defeat the heroes.

As the heroes managed to defeat the Manticore, Alex then attempts to attack Leonidas as she began to grew indebted towards the heroes because they had a true disadvantage when attempting to fight against Leonidas. However, Elisanne manages to prevent Alex to sacrifice her body again because it will violates Ilia's benevolent rules which resulted on both Leonidas and Mym getting annoyed by the charade with the former attempted to kill both Elisanne and Alex with his own dragon.

After Mym manages to defeat Leonidas with the power of love shown by both Elisanne and Alex, Leonidas had no choice but forces himself to retreat from the battle. After Leonidas had gone from the scene, when Euden offers her to join his side, she initially was doubtful as she had committed a lot of sins in the past and plans to seek peace by having a solitary journey for herself in order to atone for her sins. However, with Euden's persuasion, she manages to join his side although she prefers to have the heroes not to be her friend because she already saw a lot of darkness inside of people. But at the same time, with her joining Euden's side, she also attempts to atone for her sins in her own way. 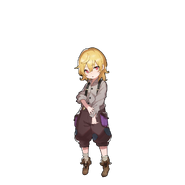 Alex as a child. 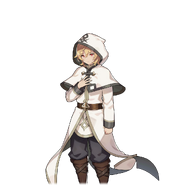 Alex as a priest. 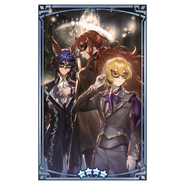 Alex in the "Masquerade Mission" wyrmprint. 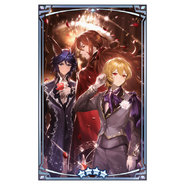