Kill Mona Vanderwaal for killing Charlotte.
Take over Spencer's life and be her.
Manipulate Toby into falling in love with her.

Alexandra "Alex" Drake is the main antagonist of Seasons 6B and 7 of the television series "Pretty Little Liars". She is Uber A, better known as "A.D.", and the identical twin sister of Spencer Hastings, half-sister to Charlotte DiLaurentis, Wren Kingston's girlfriend.

She was portrayed by Troian Bellisario.

Alex is the younger sister of Charlotte DiLaurentis and the twin sister of Spencer Hastings. On the night of her release from Welby State Psychiatric Hospital, Charlotte was killed by an unknown assailant. After her death, Alex became Uber A and decided to find the killer and avenge Charlotte's death. She knew the Liars and threatened them to find the killer's identity.

Eventually, after Uber A gives them a deadline, Hanna and Caleb hatch a plan to "deliver" the killer to Uber A, whom Caleb nicknames "A-moji", by having Hanna lie and say it's her. The plan works and Uber A is supposed to meet Hanna in the Lost Woods Resort, where Caleb, Ezra and Aria are waiting outside to trap him/her. However, Uber A had other plans. They had Mary Drake set off the alarm, while they grabbed Hanna through a hole in the floor and takes her to the Bell Tower. Uber A then texts the others and thanks them for giving him Hanna, signing the text as "A.D.".

The Liars found a doll in a church that told them that they had 24 hours to give him Charlotte's real killer or Hanna will die. They came to the decision that Alison murdered Charlotte and they left a red sweater (that they think Alison wore while murdering Charlotte) for Uber A to take as proof. Upon finding the evidence, Uber A picks the sweater up and puts it in a bag. After Alison is put in a mental institution, she is turned delusional and insane by one of Uber A's helpers—Archer Dunhill, her own husband. Archer posed as a doctor named "Elliott Rollins" and married her to take her money, but he was also Charlotte's lover. He became Alison's doctor and therapist, and abused his power to torture her for "killing" Charlotte.

When Uber A discovers that Alison wasn't Charlotte's killer, they inform Archer to drop her off in the woodlands near the institution. When driving her there, Alison thought Archer was going to kill her, so she slammed his head onto the driving wheel and made an escape. As Archer chased her, he was accidentally run down and killed by the Liars who were trying to save Alison (because they thought he was going to kill her as well). They bury his body to cover it up, and Uber A uses this to torture them. The Liars begin receiving phone calls from a man who sounds a lot like Archer, and to make sure he is dead, they dig up the spot they buried him in and find his rotting corpse, confirming their suspicions on whether he was really dead or not. Uber A films this from afar.

Two of the Liars' enemies, Jenna Marshall and Noel Kahn, become Uber A's helpers. They begin to suspect Noel is A.D., and they use everything in their power to prove that he is. Hanna decides to abduct Noel, so that she can force him to confess he is A.D. However, Noel is able to escape when Hanna leaves him alone for a moment. The Liars track him and Jenna down in an abandoned building. Jenna, who is blind, obtains a gun and walks around trying to find them to shoot them. Alison, Aria and Spencer try to hide from her while being silent, and Emily and Hanna try to escape from Noel whom is trying to kill them both with an axe. While fighting, Emily knocks over Noel who falls onto the axe, being decapitated in the process. Off-screen, Sydney Driscoll, another accomplice of Uber A, shows up and shoots Spencer. She also rescues an unconscious Jenna who was knocked over by Mary Drake when she tried to finish off Spencer.

Sometime later, Uber A renews the game by sending the Liars a board game, called "Liar's Lament" At this point, A.D. is more focused on torturing on the Liars rather than finding Charlotte's killer. A.D. starts sending the Liars on several missions to uncover several secrets, such as Alison discovering that A.D. impregnated her with Emily's eggs. Every time a Liar refuses to cooperate, A.D will send a clue to the police regarding Archer's death as a warning.

Alex/Uber A was assisted in her game by helpers, known as the "A.D." Team and the A-Team. Her known helpers are: 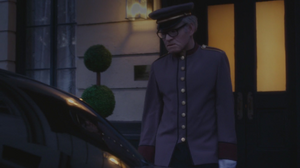 Retrieved from "https://villains.fandom.com/wiki/Alex_Drake?oldid=3366315"
Community content is available under CC-BY-SA unless otherwise noted.