Alexander "Alex" Faust is a minor antagonist in the sixth season of Arrow and the main antagonist of the book Arrow: Fatal Legacies. He is a terrorist and skilled in using explosives.

He is portrayed by Dominic Bogart.

Faust was married to an unnamed woman and had three children and a lead expert on a controlled demolition team working at Brick Droppers Inc..

At some point, he and his team began to demolish a building, but a group of children managed to sneak inside the building without unnoticing. Sadly, Faust children were with the group, as he detonated the building as well as killing the children inside the building. After learning this, he went insane and started to use his skills to wreak havoc.

Five months after the explosion at Lian Yu, Oliver, Diggle and René hunt down Alex Faust, who has blackmailed the mayor of Star City by threatening to launch a missile. Although they manage to track Faust down to an old ship in the harbor and manage to take down his henchmen, Faust is able to reach the missile launcher and fire the missile at the city. While doing so, he sadistically tells Oliver that next time the mayor is blackmailed, he should better pay up. Oliver fires two arrows into Faust, pinning him to the railing. Faust screams in pain but also tells Oliver that he cannot stop the missile. Oliver replies that he has a very smart friend who can and, indeed, on a nearby rooftop, Curtis manages to detonate the missile mid-air, saving the city. Reading from Oliver's reaction, Faust taunts him by stating that it seems that the detonation stirred unhappy memories.

Faust is delivered to the GCPD where he is interrogated by Dinah Drake. She wants to know who paid for the mercenaries that were guarding him during his extortion plan. She manages to get her out of the room by asking for water. While Dinah leaves the precinct while searching for Quentin Lance, Faust is delivered a can of Soda. After receiving it, Faust smashes his head into the table. He reveals that one of his teeth is actually a C4 implant. He throws it into the soda and pushes over the table, taking cover behind it as the explosion blasts open the door of the interrogation room. While the door is blasted open, Black Siren arrives with more mercenaries and shoots up the precinct. The combined attack leaves nine dead and six in critical condition. It is revealed that the two are working together and that his capture was part of their plan. Faust hands Black Siren a detonator which she uses to blow up the precinct, much to Faust's amazement.

When Black Siren attacks the Arrowcave, Faust is present as well. As everybody believed her to be attacking the GCPD graduation ceremony, the only one present in the bunker is Diggle. He manages to evade the mercenaries and is soon joined by Oliver. While the two fight the mercenaries, Faust prepares explosives all over the Arrowcave. When his guards are taken down he runs off but is tackled by Diggle and thrown before Black Siren. Black Siren blows up the explosives and flees, leaving Faust behind.

A few days later, Team Arrow targets Faust and hunts him throughout the city. Faust realizes what is happening and escapes into a parking lot while ordering his men to open fire at the new Green Arrow, John Diggle. However, Diggle takes down Faust's two remaining henchmen and while Faust flees further through the parking lot, he is stopped by Curtis and René and is knocked out by Diggle soon after. He is then imprisoned. 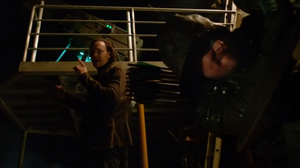 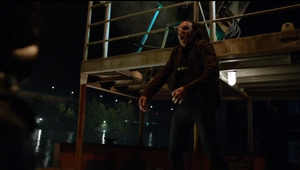 Faust is pinned to the railing 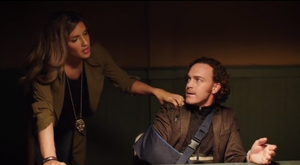 Faust is interrogated by Dinah 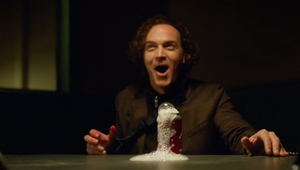 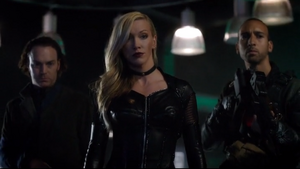