Get revenge on all of the 4 people that killed his sister Robin (mostly succeeded, but ultimately failed).

Alexander "Alex" Hammond is the main antagonist of the 1980 slasher film Prom Night. He was intent on murdering several teenagers who had been responsible for the accidental death of his 10 year old sister years previously, in a childhood prank gone wrong. Witnessing his sister's death broke his sanity, and he planned revenge.

He was portrayed by Michael Tough.

Alex was born in the year 1964, along with his twin sister, Robin. When Alex and his sister were 10 years old, he and their elder sister, Kim, were walking home from school and passed by an abandoned building where four other children, Nick, Wendy, Jude and Kelly were playing. While Kim returned to school to get her geography book, Robin, against Alex's wishes, remained to try and join in the games of the other children. An uninterested Alex left, but shortly afterwards returned to get Robin. It was then that he saw Robin fall out of a window of the building after being chased by the four children. Alex watched his sister die and saw as the other four children fled the scene. This left Alex heartbroken. Robin's death was subsequently blamed on a sex offender, Leonard Merch.

6 years later, Alex's bitterness at his sister's death caused him to attempt to seek revenge on the anniversary of her death. He started contacting his sister's killers, leaving threatening phone calls at their number and leaving their school pictures in their lockers. He also destroys a mirror in the girl's changing room.

Afterwards, during the prom where Kim was dating Nick, Alex dons a ski mask and dresses in black and sets about to systematically kill the four teenagers responsible for Robin's death. He murders Kelly by slitting her throat with a mirror shard in the changing room. He then attacks Jude while she's dating Seymour "Slick" Crane, stabbing Jude to death and then assaulting Slick. The resulting confrontation ends when Slick drives his van off a cliff, killing him.

After an extended chase with Wendy resulting in Alex hacking Wendy to death with his axe, he went backstage to where Kim and Nick were to be crowned prom queen and king. However, school bully Lou and his friends tied Nick up while Lou took his place backstage. This resulted in Alex killing Lou, mistaking him for Nick. He was knocked unconscious by a volt of electricity, during which the prom-goers fled the building. After regaining consciousness, Alex fought Nick and Kim, ending with Kim mortally wounding Alex with his axe.

Injured, Alex fled the building, pursued by Kim, and Nick. Upon exiting the building, Alex underwent several flashbacks of his sister's death, causing him to collapse. Kim, who had realized who he was, removed his mask, where Alex revealed that Nick, Wendy, Jude and Kelly were responsible for killing Robin. He then died, mourning for the loss of his sister. 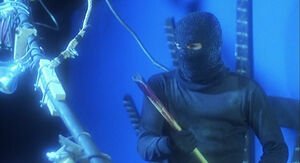 Alex during the murders
Add a photo to this gallery

Retrieved from "https://villains.fandom.com/wiki/Alex_Hammond?oldid=4087744"
Community content is available under CC-BY-SA unless otherwise noted.