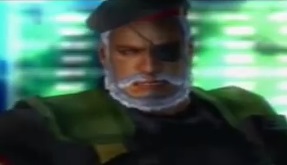 Alex Havoc is the first villain in the arcade video game Ghost Squad.

He is an Internationally most wanted suspect that was terrorizing a government restricted Grand Villa where his henchmen were holding the President and the summit members of three nations hostage. When Alpha Blue spotted him and his henchmen in a conference room, Alex Havoc ran away to escape and attempted to get away in his helicopter, but Alpha Blue brought him down with a missile launcher and killed him.

An alternate outcome of this is when Alex Havoc successfully got away in his helicopter, leaving the fates of the President and the summit members of three nations unknown.

Retrieved from "https://villains.fandom.com/wiki/Alex_Havoc?oldid=1941655"
Community content is available under CC-BY-SA unless otherwise noted.