This is for the eponymous Prototype that took over the human Alex Mercer's body. To see his original human self, see here: Alexander J. Mercer.

Bioterrorist
Creator and leader of the Evolved

Prototype:
Remember who he is.
Gain new powers.
Save New York City from the infection (all succeeded).
Prototype 2:
Spread the infection beyond New York Zero (succeeded until his death).
Get rid of Gentek and Blackwatch (succeeded).
Kill James Heller (failed).

Initially being an anti-heroic protagonist who gained his powers from an experimental bioweapon after he died as a human. However, as he is now completely consumed by the Blacklight Virus, Mercer eventually ended up losing all of his faith in humanity and is now intended on infecting all of mankind by releasing the Virus, ultimately becoming the arch-enemy of James Heller, the main protagonist of the second game, who seeks to kill him for causing the death of his wife and daughter.

He was voiced by Barry Pepper in the first game, and later by Darryl Kurylo in the second game.

While the virus itself can take anybody's form through consumption, in its typical form it looks identical to the deceased Gentek scientist Alex Mercer due to the Blacklight Virus recreating Mercer's body down to the genetic level.

Mercer has very pale skin, probably a result of being the Blacklight Virus since his skin appeared tanner in his picture with Karen Parker. His eyes constantly have a sickly gray tinting around them and he has light blue eyes.

While rarely seen without his hood, he has curly brown hair that he supposedly kept slicked back, although it's not known exactly what his hair looked like post-reanimation since he never dropped his hood.

Initially, the virus believed that he himself was the same Alex Mercer revived. Because the original Alex was protective over his sister, Dana, the virus trusted and cared for Dana and even inherited his host's feelings for Karen Parker. After discovering the truth about the outbreak in New York and real Alex's death, the virus, now adopting his host's identity and life as his own, can't help but feel disgusted by original Alex's actions and decided to leave New York in search for his place among humanity.

Unfortunately, after repeated betrayals and mishaps during his time away from NYZ after the initial outbreak, Alex decided to shed away humanity he inherited from the original, stating that stopping the outbreak was a mistake and started a new one himself to usher in a new race; he claimed he was making a better world by doing so. Despite his megalomaniacal ambitions, he appeared to retain some form of affection for Dana; when he discovered that she was plotting against him alongside James Heller, he chose to seal her in a bank vault rather than simply killing her. He also felt sympathetic towards Heller as he comforted him about his wife and daughter as well as taking it upon himself to let Maya live to become "the mother of the new world" (catalyst for spreading the outbreak).

Once reanimated by the Blacklight virus, every particle of Mercer's form, including his clothing and equipment, becomes comprised entirely of viral biomass. This substance can be manipulated at will. He can manipulate his physical form to create weapons to attack his enemies, generate armor to defend himself, and take on the appearance of another person. 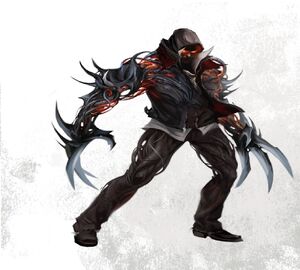 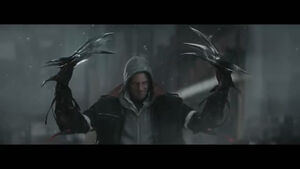 Alex's evil grin as seen in Live-Action Trailer Prototype 2: The Power of Revenge.

Alex as the final boss in Prototype 2. 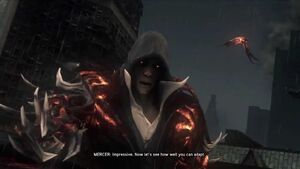