Alex Rosewater is the main villain in the animated TV series Big O. He is the chairman of the ruling corporate organization known as Paradigm Corporation.

He is the founder of Paradigm Corporation and he was the son of Paradigm City's founder. He shows great contempt for the poor of Paradigm and the foreigners living in the city; going so far as to appreciate some of the catastrophes that befall the city as they "clean up some of that abominable mess" (referring to the people outside the domes). For Alex, Paradigm's true citizens are those within the domes. Alex always wears a white suit in direct contrast to Roger Smith's black one.

Alex possesses an unquenchable thirst for power, and an "ends justify the means" philosophy. Despite being more or less the absolute ruler of Paradigm City, Alex harbors dreams of even greater power and will stop at nothing to achieve them. The power that he desires is the power of the megadei, specifically the "Big" type megadei, as he believes that their pilots are "agents of the power of God". Alex sees himself as privileged as being the son of Gordon Rosewater, and at times acts as a "spoiled child", as observed by Vera Ronstadt. Although he appreciates the power of Big Fau, he treats it as his toy, even going so far as to crafting a miniature version of Big Fau to play with as seen in Act 22.

As Season 2 goes on, Alex develops a messianic complex, after reconstructing Big Fau and starting to pilot it. Initially, he is rejected by the megadeus as its pilot after using it to easily destroy a Union megadeus. After the Union megadeus was dealt with, Big Fau displayed the message "Ye Not" as it fired its dorsal beams into the already damaged cityscape. He manages to get it to work properly only after rigging it with Dorothy's memory core, so it is unknown if he is indeed its true pilot. After he enters the megadeus for the second time, his mental state seems to continually degrade much like Schwarzwald's did after coming into contact with Big Duo. During the Union bombardment of Paradigm, he declares that he will create a new world and destroy those who don't deserve to live in his world, specifically the people who live outside the domes and the Union. It is revealed in Act 25 by Big Fau that he is not really Gordon's son but merely one of his many artificial children. As his battle with Roger drags on, Big Fau inserts cables into Alex's back, apparently fusing itself with him. Though half of Big Fau is vaporized by Big O's Final Stage weapon, Alex survives and aims to finish Roger off, however, before he can do so, he is erased by Big Venus. 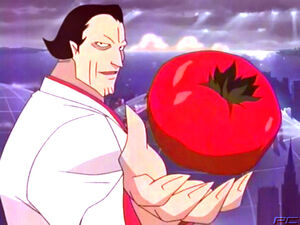 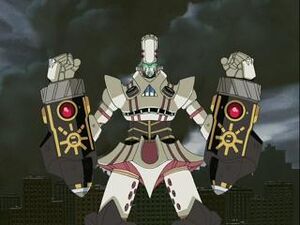 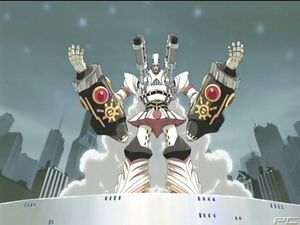