Banker (Until his death)

Get away with his rapes and murders (succeeded until his death).

Serial Rapist
Alex Tilden is one of the major antagonists in season five of Dexter and is a member of the Barrel Girl Gang, a group of men who rape and murder women and dispose of their corpses in barrels filled with formaldehyde.

He was portrayed by Scott Grimes.

After the Gang's victim Lumen Pierce discovers the identity of Alex Tilden from Emily Birch, the only other surviving woman the Barrel Girl Gang raped, she tells Dexter Morgan, who saved her from Boyd Fowler.

When they search Alex's house, Lumen finds 13 pieces of jewelry in a case that Alex stole from the Gang's victims and kept as trophies. One of the pieces belonged to Lumen's grandmother, so she takes it back.

Alex has a conversation with Jordan Chase, the leader and founding member of the Barrel Girl Gang, scared about what "the vigilantes" will do to him if they catch him. Jordan tells him to calm down and that he has a plan, and for Alex to continue about his days like normal. Alex agrees but as soon as he arrives home, he finds the videotape of Lumen and the other 14 women being raped playing in his living room, and Lumen then reveals herself. Alex tries to run away to get his gun, but Dexter quickly sedates him.

Alex wakes up strapped to a table in the "kill room" that Dexter and Lumen constructed. He begs for his life, but Lumen stabs him in the heart, killing him. 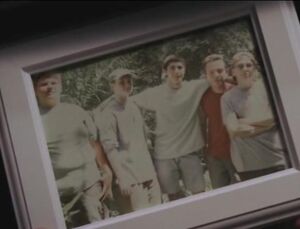 Young Alex Tilden with the rest of the Barrel Girl Gang, red shirt.
Add a photo to this gallery

Retrieved from "https://villains.fandom.com/wiki/Alex_Tilden?oldid=4291426"
Community content is available under CC-BY-SA unless otherwise noted.