Manipulating women to have sex with him.

Forcing others to do dangerous house.

Continue to abuse his power (succeeded for a while).

Alexander Davidson is a unseen antagonist who was mentioned in issue 69 of Image Comics' The Walking Dead, serving as a posthumous antagonist in volumes twelfth and thirteenth.

He was the founder and former leader of the Alexandra Safe-Zone but abuse his power to manipulate and take advantage of the community for his own benefits.

Not known is known about Davidson's past before the apocalypse. He lived in Washington, D.C. and was the security liaison for the White House and best friends with Douglas Monroe, who he invited to the Alexandra Safe-Zone when the outbreak started.

Douglas explains to Rick arriving at Alexander Safe-Zone was a rewarding experience and Davidson was a good leader. However, he changed by taking advantage of the women in the community and offering benefits if they slept with him. He also punished those who refused his advances and forcing them to do dangerous jobs they didn't want, endangering them instead. Douglas learned the way Beth was manipulated by Davidson when she kill herself.

He decided to exiled Davidson but couldn't bring himself to kill his best friend. Douglas burnt a zombie to lured out Davidson outside the walls and threaten to shoot him if he tried to follow back inside the safe-zone. 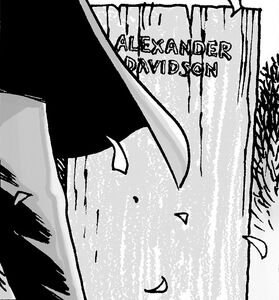 Davidson's tombstone.
Add a photo to this gallery

Retrieved from "https://villains.fandom.com/wiki/Alexander_Davidson?oldid=4042273"
Community content is available under CC-BY-SA unless otherwise noted.