Leader of the Franchise

Corner the cloning market for himself to produce clone assassins (all failed).

Alexander Leland Cayne, also known as Jack and Leland Alexander, is a major antagonist in the Hitman series, being the unseen overarching antagonist in Hitman: Contracts and the main antagonist of Hitman: Blood Money, as well as a posthumous antagonist in Absolution.

He is the former Director of the FBI and secretly the leader of the Franchise, an illegal contract killing agency and one wing of the Alpha Zerox secret society. Originally, he served as the narrator of this story but later revealed his true nature and intention by the final mission.

He was voiced by Roger L. Jackson, who also voiced Mojo Jojo.

The former FBI director and self-appointed Cloning Czar, Cayne organizes a task force to catch Agent 47 throughout Contracts and Blood Money, and seemingly succeeds when Diana injected 47 with a serum to feign his death.

Cayne's stake in the hunt is easy to explain: he's well-known for his anti-science soothsaying, in particular his opposition to human cloning. According to Cayne, it's only a matter of time before a "rogue state" reverse-engineers 47 to create a clone army of its own.

Cayne invites news journalist Rick Henderson to his manor to speak of 47, under the guise of a general interview about his work in the FBI. Here, he recalls the assassinations of many, while giving misleading details, including the Delgado boss and heir, two child abusers under the guise of public officials (although he left out Fournier's association), one or three mobsters in rehab, a crime lord-turned state's witness, people in an effort to assassinate the Secretary of the Interior, a porn tycoon and the sex-addicted son of a senator, up to the assassinations of a Saudi sheikh and scientist working with an Afrikaner nationalist. He deceptively tells Henderson that 47 was apprehended here.

After these assassinations, four franchise members are assassinated in a heaven and hell-themed nightclub in Las Vegas, and Mark Parchezzi III, as well as Vice President Daniel Morris are assassinated by 47. Cayne did not address these due to inability to provide a good fabricated story to Henderson.

Nevertheless, that is merely a ruse created by Cayne to demonize 47 and ban the cloning project of others. The truth is, Cayne and his companions had cornered the market on cloning technology and were determined not to share it with anyone. He was later outed as the secret head of the Franchise, and was eliminated by 47 alongside the rest of the Franchise with the help of Diana Burnwood and Carlton Smith. 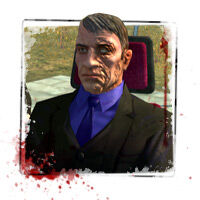