The Chronicles of Riddick: Dark Fury

Trying to capture and turn in Riddick for the bounty on his head.

Capture Riddick and collect the reward after taking him to Crematoria (partially successful, then failed).

Alexander Toombs, also known as Toombs, is a supporting antagonist in the Chronicles of Riddick franchise. He is a mercenary that is determined to catch Riddick at any cost in order to turn Riddick in for the enormous bounty on his head. Toombs would eventually capture Riddick and took him to a triple-max prison on the planet called Crematoria. However, the prison guards attacked Toombs and his mercenaries when they unknowingly let a group of Necromongers follow them and believed that they were subsequently being double-crossed. Toombs escapes the fight but would be trapped in a cage by Riddick between two Hellhounds. It is unknown what happened to him afterwards.

He was voiced and portrayed by Nick Chinlund.

The Chronicles of Riddick: Dark Fury

Toombs appears as being one of Antonia Chillingsworth's underlings and is sent along with a couple of other mercenaries to find and kill Riddick, Jack, and Imam. However, Antonia had also arranged for a dangerous creature called a Brax to go after the trio as well. Riddick would take advantage of this by injuring himself so that the mercenaries could follow his blood trail while the Brax followed close behind them (this would also be done so that Jack and Imam could escape undetected). Toombs and the other mercenaries realize too late that they walked into a trap and encounter the Brax. Toombs was the only one to survive the battle by fleeing and diving into a large pipe before the Brax could attempt to kill him. After Riddick is able to successfully escape alongside Jack and Imam, Toombs watches them while he is still onboard his former bosses ship (Antonia gets killed by Jack by the end of the film). He mentions that his business with Riddick is unfinished. After these events, he would begin his obsessive determination to try and capture Riddick for the bounty on his head.

The Chronicles of Riddick

Toombs reappears chasing after Riddick in his ship on the frozen planet known as U.V.6. Unfortunately, his crew gets eliminated by Riddick and gets thrown out of his ship after he informs Riddick who put the bounty on his head and what planet the bounty came from. Toombs would survive the fall, however, and somehow managed to escape U.V.6 and get a new crew. He and his crew would arrive at Helion Prime and track down Riddick. They destroyed a Necromonger ship that was pursuing Riddick and would then apprehend Riddick with Toombs mocking him for not killing him (not knowing that Riddick had planned to be captured in the first place).

Toombs decides to deliver Riddick to a triple-max prison due to it being the closest one nearby and because of his ships limited capabilities. Once Toombs and his crew hand over Riddick, the warden is hesitant on letting Riddick stay in the prison due to knowing how much trouble Riddick has done in the past. Later, the warden appears to be fine with giving Toombs the reward money but he and the rest of the prison guards attack Toombs and his crew when they had unintentionally been followed by a group of Necromongers and believed that the mercenaries had set them up. Toombs is able to escape the firefight, but he would be imprisoned in a cage by Riddick after he revealed to Toombs that he planned for all of this to happen in the beginning. Toombs, who is stuck in the cage, angrily says to himself that "I should of just taken the money". He then yelled out "RIDDICK" while two Hellhounds, that are in separate cages and between Toombs, try to attack him. It is unknown what happened to Toombs afterwards. 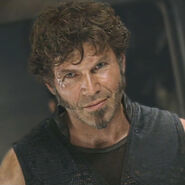 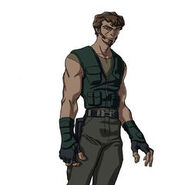 Toomb's appearance in The Chronicles of Riddick: Dark Fury 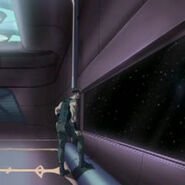 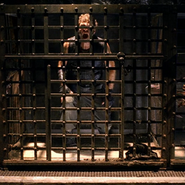