The Pirates! In an Adventure with Scientists!

Queen of the United Kingdom of Great Britain and Ireland

Head of the Church of England
Empress of India

Kill the Pirate Captain (both failed).

Queen Alexandrina Victoria Hannover, also simply known as Queen Victoria, is the main antagonist of Sony Pictures Animation's sixth and Aardman’s fifth feature film The Pirates! In an Adventure with Scientists!. She is the tyrannical ruler of the British Empire and the head of the Church of England with a fueled hatred for pirates. She planned to eat Polly, but is foiled by the Pirate Captain when he sinks her massive flagship the QV1. She is also the last British ruler from the house of Hanover due to her marriage to Prince Albert of the house of Saxe-Coburg and Gotha.

She was voiced by Imelda Staunton, who also played Dolores Umbridge in the Harry Potter film series and Mrs. Lovett in the 2012 West End adaption of Sweeney Todd.

Queen Alexandrina Elizabeth Christina Victoria is the queen of London and has a severe hatred of pirates. She is also the leader of a secret party of world leaders who join together every year to eat the rarest of creatures. She was later seen applauding with the other audience members to see the Pirate Captain (disguised as a scientist) becoming a great scientist.

The Pirate Captain has been pardoned by Queen Victoria, so which means that the Pirate Captain cannot win the Pirate of the Year awards, thus making him lose the license of swashbuckling. Then, she also was seen capturing Polly (the last dodo bird) with the other world leaders to eat all the rarest animals on the QV1. She almost had beheaded Polly, but Mr. Bobo saves her to disrupt the meal. Then, the Pirate Captain and his crew have a confrontation with her to keep Polly alive, making her get stranded on an island.

Near the end of the film, the other rare animals decide to eat Queen Victoria. It is completely unknown if Queen Victoria was eaten alive by the rare animals or if she managed to make it to London in order to resume her mandate. Because of the Pirate Captain's action against her, he received a bounty of one hundred-thousand Doubons, which is the highest bounty for a pirate in the Seven Seas, effectively making him a most dangerous pirate alive and restoring his reputation among his peers. Consequently, this infamy makes his rival Black Bellamy to lose the title "pirate of the year". 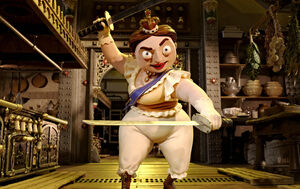 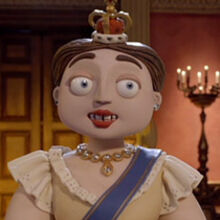 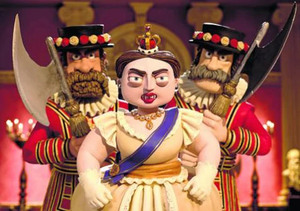