Skilled usage of his flamethrower

Reading poetry.
Walking on the beach.

Protect Magnus from being assassinated (succeeded at first, but later failed).

Alexandro Deleon, also known as Inferno, is the secondary antagonist from the slasher beat'em up game Shank 2. He's a younger brother of the game's main antagonist, Magnus Deleon, and a twin brother of Rene Deleon. He's the second boss the player faces during the game.

While Inferno's date of birth is unknown, what it known is that he used to serve as his brother, Magnus, as his body guard after his rise to power. He saved Magnus when Rene tried to assassinate him due to his abuse of power, but lost his right eye during the ordeal. As a punishment, Alexandro extracted Rene's own eye. Inferno later retired from being Magnus' guard and became a high-ranking member of his militia.

After Shank is done dealing with the entire camp of Magnus' Militia, he visits the Tequila bar at the small town of Oras he grew up in and is seen drinking his problems away. Corina approaches Shank and urges him to join the resistance against the Magnus' army, but he refuses, stating that he only returned to see Elena, the owner of an orphanage Shank used to reside in as a child, and an important motherly figure of his life as well. While they're having this conversation, a group of the Militia thugs arrives into the town, including Inferno, who seems to be the head of the group. He's enraged over the death of Razor and the destruction of one of their camps, shouting angrily and demanding an answer about the culprit. Upon not receiving it, he readies his massive flamethrower and sprays it everywhere around him, with the fire spreading rapidly. Shank hears the screams of the terrified civilians and comes to their rescue.

He discovers the entire town being already engulfed in flames and crawling with the Militia members. He slices through them effortlessly while saving the civilians that they've tied up. He approaches the aforementioned orphanage and meets Corina who informs Shank that Elena has been kidnapped by the Militia. Determined to find her, he stumbles upon Inferno loading several town residents, including Elena, into the truck which drives away shortly after. While Shank is watching this from atop the roof of a burning building, Inferno notices him right as the roof under Shank collapses, making him fall inside the building where the battle between the two men ensues. Despite Inferno's size and a powerful flamethrower, Shank wins the fight. He stabs Inferno into the chest and drags the knife across it, with the blade hitting one of the fuel reservoirs on his back. Bleeding profusely and leaking fuel, Inferno screams in defeat with the reservoirs exploding and killing him instantly.

He's an extremely tall Mexican man with a bulky, slightly overweight build, but very muscular arms. He has short black hair with whiskers and wears an eyepatch on his right eye. The right side of his face and head, along with the right arm are covered in burn scars. His clothes of choice is the black boots, brown pants, a red sleeveless shirt and grey gloves. He always carries a large flamethrower that is attached to three fuel reservoirs on his back which are strapped onto him.

Alexandro resembles a brutish and unhinged thug with a unhealthy passion for setting objects on fire. He gets very excited while using his flamethrower or fighting someone with it, laughing maniacally and making fire-related jokes. He also seems to not really care about his own safety and has absolutely no fear of open flames, as he wears no protection while utilising his weapon and has an array of burn marks on his body.

Inferno carries out the orders given to him by his brother without questions or mercy and with excessive force, aiming to destroy as much of his surroundings as possible, even if it bears no meaning to the task.

However, he's not completely heartless or mindless. It's said in his bio that, despite his intimidating appearance and chaotic nature, he likes poetry and long walks on the beach. He also seemed really upset over the death of Razor, as if he cared about him, and was willing to risk his life for the sake of protecting Magnus, even though Inferno's decision of taking Rene's eye after he lost his own has revealed him as a barbarian with a taste for revenge. 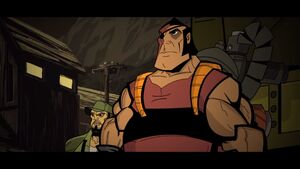 Alexandro Deleon, aka Inferno, upon arriving at the town of Oras. 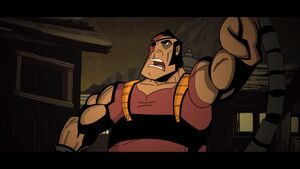 Inferno getting ready to torch the town. 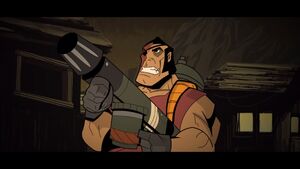 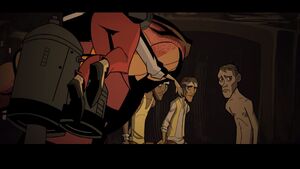 Inferno carrying Elena to the truck. 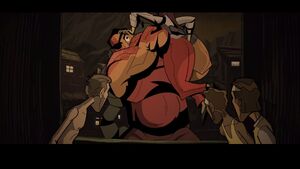 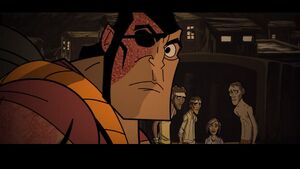 Inferno seeing Shank watching him from the roof. 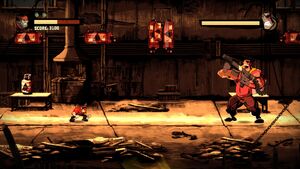 Inferno during his boss battle. 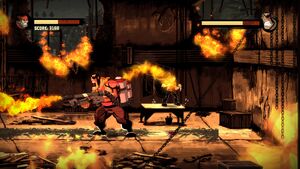 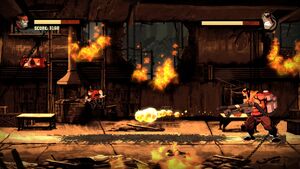 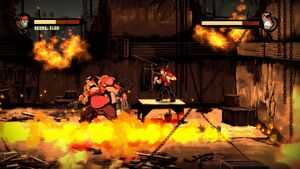 Inferno spraying fire on the ground. 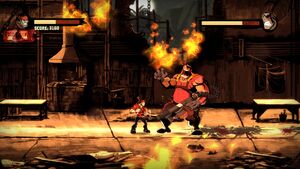 Inferno about to grab Shank. 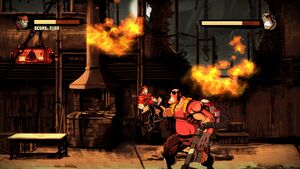 Inferno grabbing Shank and spraying fire directly onto him. 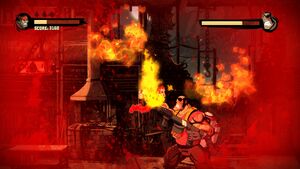 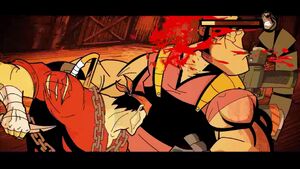 Shank slicing away at Inferno. 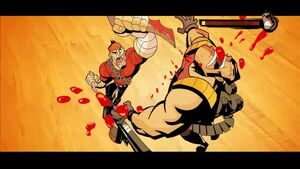 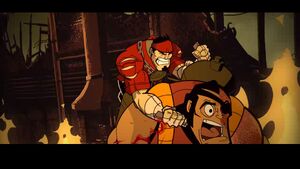 Shank stabbing Inferno after defeating him. 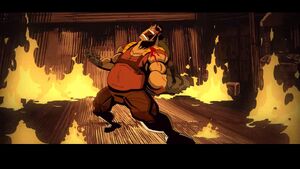 Inferno screaming in agony moments before his reservoirs explode. 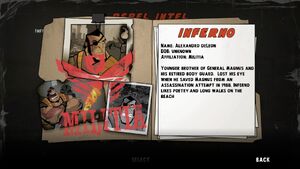