Help Marius with his plans (failed)

Alexia is a supporting antagonist in Underworld: Blood Wars. She is a vampire and the lover of the Lycan leader Marius. She is also a Death Dealer in the Eastern Coven lead by Semira.

She is portrayed by Daisy Head.

Unbeknownst to the rest of the Eastern Coven, Alexia is the lover of the Lycan leader Marius, and plans to betray them. Alexia is sent to find Selene and David and bring them to the Eastern Coven after the Vampire Council offers clemency to Selene. Following Selene and David's flight for the Nordic Coven after being framed for the murder of several Death Dealers, Alexia is tasked with finding them by Semira. However, after she finds evidence of their travel to the Nordic Coven, Alexia contacts Marius to tell him where to find them, before traveling to the Nordic Coven's stronghold herself.

Later, during a duel between Marius and Selene, Alexia reveals her true allegiance by plunging her sword into the back of her fellow Vampire. To discover if Selene is telling the truth about not knowing the whereabouts of her daughter, Alexia licks Selene's blood off her sword,  to Selene's blood memories. She then reveals to an enraged Marius that Selene is indeed telling the truth. Marius orders her to return to the Eastern Coven, saying the Lycans must attack as soon as possible and that she knows what she must do.

Upon her return to the Eastern Coven, Alexia snaps the neck of the Death Dealer overseeing the stronghold's surveillance cameras and proceeds to shut down the Coven's defenses, allowing the Lycans . She then gives  on the events at the stronghold of the Nordic Coven to Semira. Unfortunately for Alexia, Semira slashes her across the throat with a hidden knife, mortally wounding her. As she is bleeding out, Semira reveals to her that she always knew about her relationship with Marius and used her for her own purposes. 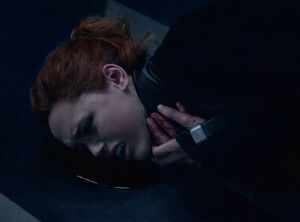