Over Justice's Dark Half (possibly)

Using Akane Shinjo as a pawn and brainwashing her to create Kaiju and cause destruction.

Continue feeding on negative emotions to maintain his immortality (both failed).

Alexis • Kerib is the main villain of the Studio Trigger anime miniseries SSSS.Gridman. He is an immortal, misanthropic cosmic being who, unlike his predecessors Khan Digifer/Kilokahn, sought to feed on others' emotional suffering and manipulate insecure humans such as Akane Shinjo so he can twist their mental state inside out for such purpose as means to amuse himself, making him a secondary archenemy of the digital superhero Gridman.

He is voiced by Tetsu Inada in the original Japanese version, and by Barry Yandell in the English dubbed version.

Alexis is neither cosmic being nor immortal from start, but rather the corrupted form of Over Justice himself, specifically his future self. During his thousand years of his multiversal journey, Over Justice became corrupted at some point and his darkness spawned Alexis within him. The malign entity soon took over Over Justice and proceeded to feed on negative emotions to survive before eventually purged from its host and Akane in courtesy of Gridman's Fixer Beam. Whereas the purified Over Justice may return as Gridman Justice, later on, his dark half Alexis, which has been reduced into a sentient fragment as seen in the final episode, remained in Gridman's custody and had to wait for his trials.

Alexis was a mysterious entity who, plagued by emptiness from his immortality, sustained himself on the suffering of others to ease it. At some point, he utilized Akame Shinjo as a pawn to turn her into a living battery, exploiting her obsession for perfection in a simulated world they made to twist her soul from inside out. This attracted the attention of Gridman who set out to stop him, only for Alexis defeated him and resulted him became fragmented into six parts: Four of them spawned a group of sentient Assist Weapons who called themselves Neon Genesis Junior High Students, while one resided within Gridman's chosen partner and host at that time Yuta Hibiki and the master fragment, Gridman himself, resided within a copy of Junk in Rikka's shop.

Alexis was first seen in the computer world, turning Akane's model of Ghouligas into a giant. He then helps Akane create the various kaiju throughout the series. Secretly, he was simply using Akane's kaiju to destroy the city and have it rebuilt every time for sadistic enjoyment.

Akane invites Yuta out for a meal, where they are joined by Alexis. Much to Yuta's surprise, no one noticed of the alien figure, implying he has a similar cloaking ability as the Illusion Monsters. Just as Yuta's about to eat, his Primal Acceptor goes off, revealing that a kaiju is attacking. Akane goes home, confused that a kaiju is attacking without her creating it, and Alexis reveals to her that Anti created it and asked him to bring it to life, much to Akane's displeasure. After Gridman and Sky Vitter destroy Diriver and defeat Anti, Alexis directly confronts Anti, who punishes the human lookalike by stealing his buzzsaw and slashing his face, killing him.

He continued creating kaiju designed by Akane and, towards the end, pushed her into creating more. After Akane loses the will to make more kaiju, Alexis revives many kaiju that were previously defeated by Gridman. When all of them are defeated, he uses his Instance Abreaction on Akane, turning her into a kaiju.

Rikka confronts him but Alexis reveals to her that she is simply a manufactured imitation, a Repli-Compoid. His words fail to phase Rikka. Anti rescues Akane from her kaiju form but just as he does, Alexis kills Rikka by impaling with a massive sword and swallows Akane with his cloak. Absorbing her negative emotions, Alexis evolved into his giant form. He fought Gridman, who had regained his true form, and was initially winning until Gridman realized his true power was not simply to attack and destroy, but also to repair and mend. With that, Gridman defeated Alexis with the Grid Fixer Beam, clearing Akane's heart and thus weakening Alexis. In a final clash, Gridman won and all that was left of Alexis was a smoking shard, which was sealed in Hyper World.

At first, Alexis appears as a friendly individual and companion of Akane who acts polite to everyone he meets. However, this turns out to be manipulation just to hide away his true nature: a petty being with motives to unleash Kaiju among humanity simply out of boredom of his immortality. He takes little pity of Akane's regrets to feed on her negative emotion and is willing to transform her into a Kaiju once she outlives her use to him. When Anti tries to rescue Akane, Alexis stabs him in the back without remorse. 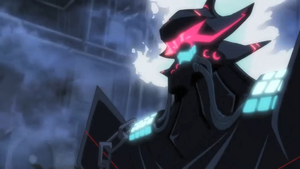 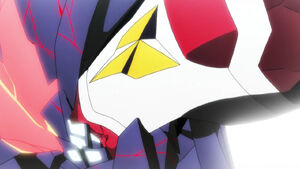