Alexis (We Summon the Darkness)

We Summon the Darkness

Member of the Daughters of Dawn

Serve the Daughters of Dawn by killing people.

Alexis Butler is one of the main antagonists of the 2019 horror/thriller film We Summon the Darkness. Alexis is a member of the Daughters of Dawn and the daughter of Pastor John Henry Butler.

She was portrayed by Alexandra Daddario, who also played Jade in Why Women Kill.

Alexis and her two friends, Val and Bev, take a road trip to a heavy metal concert. Along the way, a van drives past their truck and one of the passengers tosses a chocolate milkshake onto their windshield, forcing the girls to pull over. The girls make it to the concert where they spot the van. Val tosses firecrackers into the van, forcing its passengers, a trio of guys named Mark, Ivan, and Kovacs, out. After the girls explain that they were driving the truck they tossed their milkshake onto, the guys apologize and they attend the concert together. After the concert ends, Val, Alexis, and Bev invite Mark, Ivan, and Kovacs to Alexis’s father’s house where they all share drinks and play a game of "Never Have I Ever" that gradually turns dark when Alexis remarks she's never drugged someone's drink, and it turns out that she drugged the guys' drinks. The guys all pass out.

The girls strip the guys to their underwear and tie them up inside the family room which is decorated with satanic symbols and paintings. After the guys are awoken by being splashed with water, Alexis, Val, and Bev are suspected of being Satanists by the guys, but the girls reveal they're actually members of the Daughters of the Dawn, a Christian congregation who commit murders and frame actual Satanist cults as part of a wider conspiracy by Pastor John Henry Butler, Alexis's father, to deceive the innocent into embracing Christianity. When Ivan harshly berates her for her congregation's shortsightedness, Alexis stabs him in the throat, much to the horror of his friends. She prepares to kill Mark until she's stopped by Bev, much to her irritation. The girls retreat to the bathroom to discuss things, during which Mark and Kovacs get free. They hear the guys and come out the bathroom. Alexis and Val chase the guys into the pantry. Alexis then orders Bev to go to the barn and find something to break down the pantry door. She and Val then taunt Mark and Kovacs by spraying bug spray into the pantry.

When Alexis's stepmother Susan arrives, Alexis tries to send her on her way but is dismayed to learn that Susan called the police after suspecting something is amiss. When Susan discovers what the girls are really up to, Alexis stabs her in the stomach and insists to Val that they stick with the plan. She then shoots fire under the pantry door with a makeshift flamethrower until the sheriff arrives. Alexis tries to send the sheriff away but runs back into the house when the sheriff quickly becomes suspicious. She hides while the sheriff prepares to apprehend Mark and Kovacs, only to be shot and killed by Val, who jubilantly fires a few bullets into the pantry door to scare the guys, much to Alexis’s annoyance.

Alexis and Val then fight over the gun until Bev returns with an electric weed wacker and confronts them about Pastor Butler's scheme. Alexis refuses to believe Bev's claims and is wounded in the leg by Bev. She then heads upstairs to her bedroom and plays a song at high volume on her music player. Val cuts the house's power and Alexis fights Mark. She ends up sustaining a wound on her face. After Pastor Butler arrives home and shoots Mark, Alexis is chastised by her father for messing up his plan. Butler begins to strangle her until Bev, fresh off killing Val, knocks him away. Alexis breaks down and tries to blame her father for her actions, but when Bev refuses to believe her, she tries to choke Bev but ends up falling out the window.

Shortly after, as Bev and Mark escape in the girls' truck, they come across a crazed Alexis standing several feet ahead of them. Bev drives straight at her and Alexis is heard screaming as the screen cuts to black.

It is later revealed that Alexis was killed, and Pastor Butler twists the truth of Alexis's actions, saying she joined a Satanist cult that led her to commit her heinous acts. 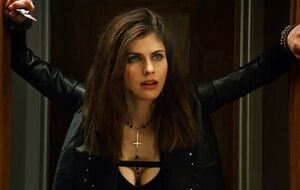