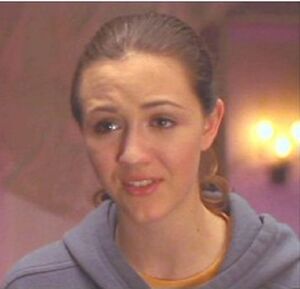 Alexis Hall is the main villainess in "Full Moon Halloween," an episode of The Nightmare Room.

She was played by Madeline Zima.

Alexis, Todd, Dex, and Janet are invited by Freddy to his new house, which resembles a spooky, haunted house, for what he stated was for a Halloween party. However, Freddy reveals that the real reason why he invited his friends is that he suspects one of them of being a werewolf who killed his brother. He uses little furry creatures called plogs to find out who the werewolf is, and one of them bites Alexis, but that is attibuted to the plogs being out for an extended period of time. At that moment, the plogs go wild and the teens have to capture them all.  At episode's end, Alexis is found at the upstairs attic by Freddy, and she is staring outside the window at the full moon. At that moment, the evil Alexis transformed into a werewolf, meaning the plogs were correct. After her transformation, Werewolf Alexis attacks Freddy, seemingly killing him.

Add a photo to this gallery
Retrieved from "https://villains.fandom.com/wiki/Alexis_Hall?oldid=3363300"
Community content is available under CC-BY-SA unless otherwise noted.