Servant of the Master of Laketown

Control over the people of Lake-town

Mistreating the citizens of Lake-town.

Steal some gold from the people of Lake-town and escape with it (failed).

Alfrid Lickspittle is an extremely cowardly character from Sir Peter Jackson's movie adaptations of The Hobbit, serving as a major antagonist in The Desolation of Smaug and The Battle of the Five Armies. He is a man of Lake-town, and the assistant deputy and councilor of the Master of Laketown.

He was portrayed by Ryan Gage.

Alfrid is only indirectly referred as one of the Master's Counselors, but not by name. The character is created for the movies.

Alfrid advises the Master in matters of diplomacy, trade and the defense of Lake-town. At heart though, he is a power-hungry sycophant, and his counsel could not always be relied upon to serve anyone other than himself.

He treats the citizens like dirt and stops Bard from entering Lake-Town with barrels filled with fish as he is not allowed to fill the barrells. He orders Braga and the guards to throw the fish into the lake, but Bard threatens to tell the citizens that the Master is throwing fish and Alfrid orders the guards to stop and angrily allow him to pass.

Later on, Alfrid warns the Master about Bard's rebellious attitude against him, and is ordered to send spies to watch his house. He writes a fabricated excuse to arrest Bard. Later he was distrutful towards Thorin, Bilbo and the other Dwarves but eventually agrees with the greedy Master in welcoming them as friends. However the next day he rudely sends away Oin, Bofur, Fili and Kili, refusing to help them when they tell him that Kili is wounded from an arrow he took to the knee the day before.

Later, Alfrid helps the guards arrest Bard by tripping him as he was running before the Master knocks him unconscious with a stick to finish him off before imprisoning him.

Later, Smaug attacked Esgaroth for helping the dwarves reach Erebor. The Master of Laketown tried to escape with his gold, Alfrid, Braga and a few guards. However the boat was too slow and full of gold. Alfrid managed to kick one of the guards off the boat to pick up the pace. Later, the Master betrays Alfrid, throwing him out into the lake, and Bard uses his boat to free himself. When Smaug is killed by Bard, his dead body falls on the boat, crushing the Master, Braga, and the other guards that were on the boat.

Alfrid unfortunately survived and continues to mistreat the people of Lake-town and behaves selfishly. He quickly takes side with Bard after the Master's death to avoid trouble. When Azog's orc army attacks the people who are taking refuge inside the ruins of Dale, Alfrid refuses to join the men of Lake-town battling the orcs and disguises as a woman to hide from the battle. When he is discovered and called a "coward" by the people of Lake-town, he flees after stealing some gold from the people.

Alfrid is later attacked by a troll, but Bard kills it. Alfrid shows his cowardliness, and runs away. He later hides in a catapult attached to a dead Troll, watching as Gandalf confronts another Troll unsuccessfully trying to use his staff's power. However, one of Alfrid's coins slips off his corset and falls on the catapult lever. The coin acts as counterweight, throwing Alfrid inside the troll's mouth. Both Alfrid and the troll are asphyxiated, unadvertently saving Gandalf. 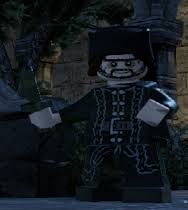 Alfrid in LEGO The Hobbit. 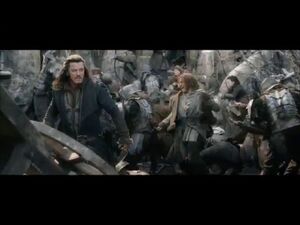