Pushing people on the staircase.

Kill all women who sleep with Hogan, then kill Hogan (failed).

Alice (real name Veronica) is the main antagonist in the 2014 thriller film, The Scribbler.

As Alice, she appears as a woman with a dark, gothic appearance, with dark hair covering her eyes. Upon receiving treatment from the enhanced "Siamese Burn" machine, she appears in a much more superhuman way, with a dark aura around her.

Suki described her as a sociopath upon their first meeting and Dr. Sinclair writes in her file that she is highly dangerous. However, upon returning to her Veronica persona, she feels remorseful for what she has done.

Veronica was a girl with multiple personalities as the result of being abused as a child. She was abused by her father and grandfather during her childhood, starting with physical assaults by her dad when she was just a baby. She began developing imaginary friends that were aged between 2 and 34 to bear with the trauma. She suffered from paranoid schizophrenia and dissociative personality disorder.

She was eventually sent to Dr. Sinclair where she underwent "The Siamese Burn", which had ultimately failed. At some point, she escaped and went to the Juniper Tower posing as a woman named Alice.

When Suki encounters Alice for the first time on the staircase, Alice pushes her several times down the stairs, claiming that she is looking for her dog named "Hogan." Hogan later tells Suki that Alice and him had had sex at one point and had grown jealous of the other women he had slept with since then. Alice is later seen again looking through Hogan's peephole in his door. Meanwhile, during Suki's time as The Scribbler, several of the women in the building are found dead outside the building, from apparent suicides. Alice later sneaks into Sukis apartment and finds 'The Siamese Burn' machine The Scribbler had been working on, this machine allowing one to reach their full mental capacity, turning them superhuman. Suki learns by going through Dr. Sinclair's file that Alice is the frequently mentioned "Escaped Patient 99', AKA Veronica, and that she is a homicidal maniac who had been murdering the women in the apartment, making it look like suicides. Alice attacks Hogan and pushes Suki out the window, however, Suki becomes The Scribbler and has a battle with Alice, in which she tries to confide in her and help her. After Veronica returns from the "Alice" persona, she dubs herself as "The Pusher" before jumping off the roof, ultimately committing suicide. 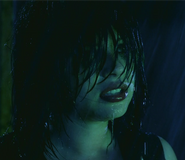 Add a photo to this gallery
Retrieved from "https://villains.fandom.com/wiki/Alice_(The_Scribbler)?oldid=3961253"
Community content is available under CC-BY-SA unless otherwise noted.