A mentally ill and homeless man by the name of Suzuki Yuuto was suspected in the murders, and was even found wearing Akio's bloodstained coat. He was arrested, but he claimed a "demon black man with no face" had given him the coat, and the homeless shelter where he lived had records and witnesses of him being there on the nights of the murders. 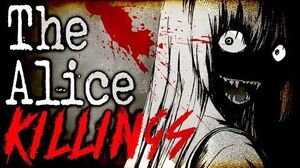 Retrieved from "https://villains.fandom.com/wiki/Alice_Killer?oldid=3411790"
Community content is available under CC-BY-SA unless otherwise noted.