Alice May is a minion of Mr. E and a recurring antagonist in Season 1 of the cartoon series Scooby-Doo! Mystery Incorporated, the 11th incarnation of the Scooby-Doo franchise. She is teenage girl, who disguised herself as the Ghost Girl and later the Obliteratrix, to destroy the new Mystery Incorporated.

She was voiced by Hynden Walch, who also voices Harley Quinn from The Batman and Madame Rouge and Blackfire from the 2003 Teen Titans animated series.

Alice May is hired by Mr. E to help Mystery Incorporated get the next piece to the mystery of Crystal Cove by posing as the Ghost Girl. She created her costume, then got a boy named Randy to go to a prom with her, she then turned into the Ghost Girl and kidnapped him. She then went to Crystal Cove high, where she tried to get Fred to go to the prom with her, but Daphne was able to convince him otherwise.

Furious, she became the Ghost Girl and crashed the prom, scaring everyone but the gang out of the school. They then successfully trap her and send her to prison. While she leaves, she drops her bag, which contains an old yearbook with a bookmark at a page about the original Mystery Incorporated. Ed Machine, a henchman of Mr. E, bails Alice out of jail, and tells her that her work is done, sending her off.

Later, Alice May returned in a new disguise called Obliteratrix. This time she was carrying out Mr. E's orders to make it look like the kids were in danger in order to draw out Professor Pericles; if he came to help them he might weaken his defenses on his piece of the Planispheric Disk. Alice May was once again imprisoned. 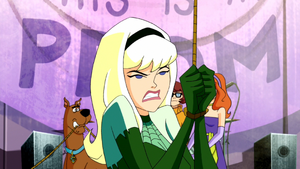 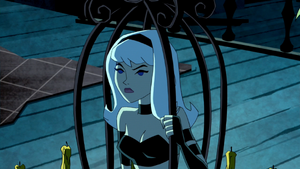