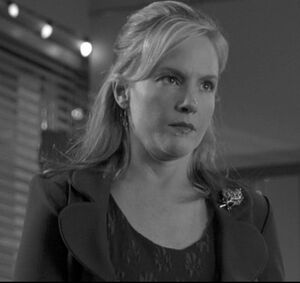 Alice Westergren is the main villainess from "Mr. Monk and the Secret Santa," episode 4.09 of Monk.

She was played by Rachael Harris.

Alice Westergren is a corporal in the San Francisco Police Department, and the revealed mistress of fellow cop Terry Chasen, who was separated from his wife. Alice and Terry dated for seven months until Terry reconciled with his wife and ended their affair. Enraged over the breakup and fearful of possibly spending the rest of her life alone, Alice devised an evil plan to kill her former lover.

Alice's plan began with orchestrating a Secret Santa gift exchange for the office Christmas party, and rigging the drawing so that Captain Leland Stottlemeyer would draw Terry's name. Later on, the evil Alice poisoned a bottle of port wine with strychnine (doing so in her basement) and wrapped the bottle as a gift to Stottlemeyer, knowing full well that Stottlemeyer doesn't drink port. The villainess brought the bottle to the station with a note addressed to Stottlemeyer, who took the bottle to his office. During the party, Alice snuck into Stottlemeyer's office and took his intended gift for Terry, a hair trimmer. While Stottlemeyer frantically looked for the gift, Alice suggested the wine as a replacement gift. Her plan succeeds, and Terry drinks the wine and succumbs to the poison.

Alice's scheme was to make it look like Stottlemeyer was the intended target of a criminal named Frank Prager, who held a grudge against Stottlemeyer after the death of his brother. However, Alice was revealed as the villainess by Monk, and it was at Alice's home that Monk (along with Stottlemeyer, Natalie, and Randy Disher) confronted her over her murderous actions. Alice confessed everything, stating that she was afraid of living alone. As to what gave Alice away as the killer, Monk stated that it was the Christmas cards. Alice drew Monk's name in the gift exchange, and she bought him a whisk broom, which Monk loved. However, Monk pointed out that the card she sent him with the gift was too big for the envelope, while the card connected to the wine was too small for that envelope, meaning that she had mixed up the cards. After expressing shock over her minor mistake, Alice was arrested for Terry's murder. 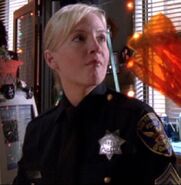 Add a photo to this gallery
Retrieved from "https://villains.fandom.com/wiki/Alice_Westergren?oldid=2213327"
Community content is available under CC-BY-SA unless otherwise noted.