Villains Wiki
Register
Don't have an account?
Sign In
Advertisement
in: Femme Fatale, Wrestlers, On & Off,
and 7 more

Alicia Fox is a current WWE Diva and a former WWE Divas Champion, who has acted as both a face and a heel in her career, but has mostly performed as a villainess.

Alicia Fox debuted as a wedding planner for Vickie Guerrero and Edge, but already caused a huge stir when video of Alicia and Edge making out with each other was revealed. After spending a brief amount of time as a face on the ECW brand, Alicia became a villainess when she was moved back to SmackDown in 2009; mainly serving as a minor heel Diva and a sidekick to Michelle McCool. Alicia even helped Michelle defeat Melina to win the WWE Women's Championship at The Bash in 2009.

Alicia was moved to Raw later that year, where she feuded with Mickie James and Melina. She would capture the WWE Divas Championship in 2010 by defeating Maryse, Gail Kim, and entering champion Eve Torres in a fatal four-way match. During her championship reign, Alicia resorted to faking an injury to retain her title and developed a huge ego; stating that she had beaten every Diva in WWE. Alicia lost the title to Melina at SummerSlam later that year.

Alicia was moved back to SmackDown in 2011, serving as the lead villainess with Rosa Mendes and Tamina Snuka as her cohorts. In this role, Alicia has feuded with Divas such as Natalya, AJ Lee, and Kaitlyn. Alicia's first run as a villainess finally ended in August 2011.

Alicia competed as an on-the-fence character, or tweener, beginning on September 2012, but by 2013, she was back to being a full-fledged villainess and aligning mostly with Aksana in her feud with the cast of Total Divas. Recently, the evil Alicia picked up a habit of attacking her opponents before her matches and then throwing temper tantrums after losing. In these "moments," as she calls them, Alicia screams at the fans, the referee, and even the announcers before making her exit. In one occurrence, Alicia left after stealing JBL's cowboy hat.

As a villainess, Alicia is arrogant, a bit condescending and catty, and very ruthless in the ring. She also has a slight tendency to mock her babyface opponents. 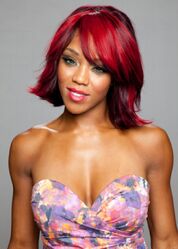 Alicia Fox in her confetti dress. 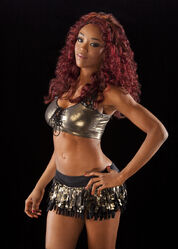 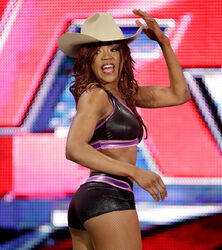 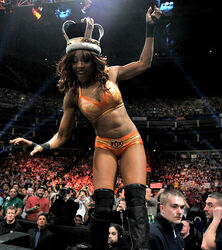 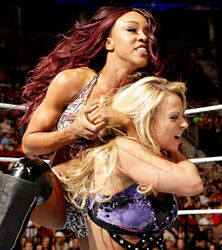 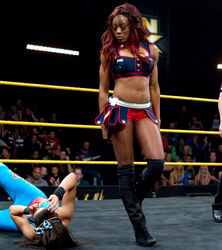 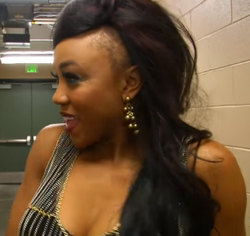