Villains Wiki
Register
Don't have an account?
Sign In
Advertisement
in: Articles under construction, Mature, TV Show Villains,
and 14 more

Alien Cows are a species of one-time villains from the Comedy Central animated series Brickleberry, as well as the main villains of the Brickleberry comic book franchise "Armoogeddon". They are a herd of alien cows who came to Earth to take over after global warming destroyed the planet, thanks to their constant farting.

In "Global Warning", Woody denounced all rumors of global warming and was annoyed with Ethel constantly babbling about it, especially when she said that cow flatulence was one of the main causes of it. Woody decided to piss her off by rounding up a herd of cows and making all fart just for the hell of it. Meanwhile, Malloy had an odd fear of cows that he just couldn't handle and Denzel exploited the hell out of this by following Malloy around all week and scaring him with cow costumes and such.

At the end of the episode, Woody release so much cow farts into the air, that he made them go into the red zone, which caused a giant U.F.O. full of alien cows to come down to Earth and invade. Out of the U.F.O. came a cow who held Woody, Steve, Malloy, and Denzel at gunpoint and told them that he, along with all the other cows would be taking over the world.

The alien cow said that all cows were actually an alien species that sent a small group of their king to Earth, where it was their plan all along to release flatulence into the air until greenhouse gasses had been raised to a level they could thrive in. The estimated time for this plan coming to fruition was around another 71,000,000 years but thanks to Woody's stupidity, they could take over today in the year 2015. A bunch of other armed alien cows came out of the spaceship as he explained this and the cows that were currently on Earth stood up and pulled out guns of their own and got ready to kill everybody.

Woody asked very kindly if he could live in harmony with the cows and the cow said that this would be perfectly fine. Another cow came up to him and reported that humans had been eating them and yanking on their teats, which they were not happy about. The cow decided to drop all plans of peace and harmony and just take over the world and destroy everybody, except for India. Thw cows proceeded to use their laser guns to vaporize everybody from existence, from Woody to Malloy to Connie to Ethel to Denzel to Steve.

Miraculously, Steve woke up in the hospital alive and well. However, he was greeted by a cow version of Dr. Kuzniak naked Dr. Moozniak, who told him that he was going into human slavery. A bunch of military cows came by, grabbed Steve, and dragged him to his slave farm.

Around the world, cows had all taken over and were living in society as the new dominant race. Cows worked at gas stations, ate dirt and grass served to them at restaurants, and even worked and performed at strip clubs. For some reason, Bobby was shown as one of the attendees of the strip club in his human form and was not being destroyed or enslaved by the cows. He was just happy to be there because the cow stripped fueled his bestiality.

In the crossover episode "Paradise PD Meets Brickleberry", Malloy and Denzel broke the fourth wall to question why they were still alive after being killed by alien cows. Steve brought up that he came back from the future to save their lives, as seen in the Armoogeddon franchise. Nobody else remembered this happening and Connie denounced the comics as being non-canonical. 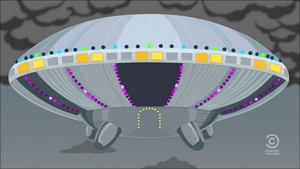 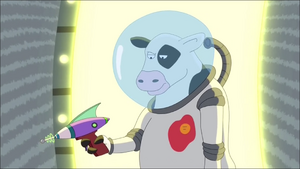 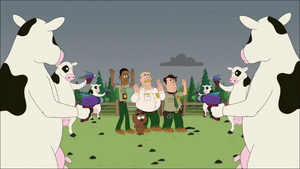 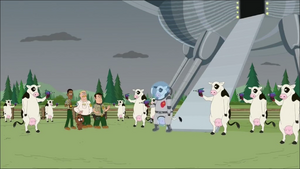 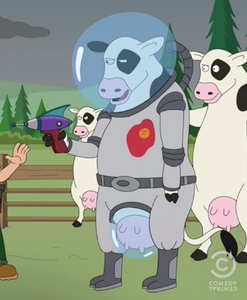 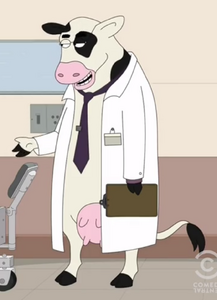