Alien Guts is an alien that has appeared as an antagonist in the Ultraman franchise, first appearing in Ultraseven.

Alien Guts first appeared in episodes 39 and 40, where two plotted to conquer Earth by defeating Ultraseven and causing humanity to lose hope. They imprisoned Ultraseven within the Crystal Cross, but Ultraseven regained his energy thanks to the Ultra Garrison and freed himself from the crystal using the Break Beam. Alien Guts was later destroyed by Ultraseven with his Eye Slugger.

After Temperor and Zarab died completing their parts, Guts and Nackle proceeded to Phase 3 of their plan. Guts trapped Mebius within a Crystal Crucifix, prompting the Ultra Brothers to travel to Earth to help. Though the Ultra Brothers managed to free Mebius, they themselves were soon trapped. Guts and Nackle then attempted to use the Light Energy of the Ultras to break the seal of U-Killersaurus. However, Mebius managed to regain his strength and attacked the two aliens, eventually killing Guts with his Mebium Shot.

Alien Guts had his Gomess challenge Rei's monsters. While Gomess was initially winning, the tide soon shifted when Gomora destroyed Gomess with his Super Oscillatory Wave, prompting Guts to retreat.

Alien Guts later reappeared to challenge Rei with Cherubim, but was later killed when Cherubim tripped on its tail and fell on him. 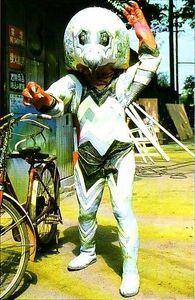 Alien Guts in his first appearance in Ultraseven.
Add a photo to this gallery
Retrieved from "https://villains.fandom.com/wiki/Alien_Guts?oldid=3532489"
Community content is available under CC-BY-SA unless otherwise noted.