The Alien Leader is an unnamed one-time villain from the Cartoon Network original series The Powerpuff Girls, only appearing in the episode "Forced Kin". He is a ginormous, robot-like alien supervillain who came to Earth to cause a massive amount of damage to Townsville. The Powerpuff Girls were defeated by him, but Mojo Jojo was able to overpower and defeat him.

An alien spaceship destroyed various buildings in Townsville, using powerful laser beams, so strong, they were able to work from outer space. The Powerpuff Girls sprung right into action and faced the alien spaceship. The Powerpuff Girls found themselves paralyzed in shock over the inconceivable, towering size of the shuttle. Nevertheless, they fought the machine, and hoped to take it down. However, every one of their attacks was used right back against them, as whoever controlled the ship, was able to extrapolate their every move and decision, before they could even make it. Every counter attack made by the alien spacecraft was far more powerful than the counterparts, from The Powerpuff Girls. It was then, that they realized, they could not take on this villain alone, and they needed help from someone else, who was able to get into the mind of a villain. Their best bet was to turn to Mojo Jojo.

Mojo Jojo refused to help them at first, but The Powerpuff Girls let him know that if he destroyed the world, this would lead to him being destroyed as well. They motivated Mojo Jojo to fight him, by saying that this villain was far superior to him, making Mojo Jojo jealous, so he would really want to stop him.

Mojo Jojo became the teacher, and had The Powerpuff Girls assist him in taking down this alien menace. He needed to teach them how to be evil, so that they could better defeat him. This was tough for Blossom and Bubbles, but Buttercup got on board with this very quickly. Mojo Jojo observed the ways of this evil villain, through his telescope, and noted just how fantastic it was, in it's crimes. The alien spaceship blew up a dam and the water went flowing toward a nuclear power plant, and it's crashing into the plant, caused it to melt down and explode.

Mojo told the girls to gather all the stinky cheese they could gather. Confused, the girl tried asking him why this was a necessity, but he shouted at them to do everything he demanded, with no questions asked. The Powerpuff Girls gathered all the stinky cheese they could get their fingerless hands on, while Mojo saw the alien force do exactly what he assumed it would do. Just as he predicted, the alien menace planted one giant magnetized machine on the face of the earth, and another one on the moon. The two magnets would create a magnetic beam between the two celestial bodies, and reposition the Earth, closer to the sun, and melt the Polar ice caps, following the "meltdown" theme of the alien force's previous attack. When the Polar ice caps melted, this released a woolly mammoth, who went around Townsville, destroying things. When The Powerpuff Girls returned with the cheese, Mojo told them to plant the cheese on the mammoth. They did just this, and his plant went into action. The smell of all the stink cheese attracted a bunch of rats, which all came to the mammoth and scared it away.

The alien force's next attack was brainwashing a network of people, working in postal service, making them switch the labels on a package for the military and a birthday present for a little boy. This led to a little boy getting a missile launching program for his birthday, thinking it was a video game. He launched the missile and caused a bunch of chaos with it in real life, thinking he was just playing a game. The initial plan the military had was to use this missile to destroy a potentially dangerous volcano. However, all the military got was a video game, and they thought this was the missile program. So, instead of doing any actual work, they just ended up playing video games. Mojo Jojo's counter attack was to send Blossom to use her ice breath and freeze the volcano, while Bubbles and Buttercup heated the surface of the space shuttle, with their laser eyes. This way, the heat-seeking missile would mistake the space shuttle for the volcano and blow it up. As planned, the missile blew the spacecraft out of orbit, and sent it plummeting down to Earth.

Out of the space shuttle came, the Alien Leader, finally revealing himself to the public eye. The Alien Menace destroyed everything in sight, without even trying. The conjured up a tornado, and used it on an oil rig, turning it into an oilnado. The oilnado went to a fire producing place. Mojo Jojo told The Powerpuff Girls to go to the fire producing place and activate the shut off valve. When they got there, the shut off valve was missing, and the Alien Leader revealed to the girls, that he had it in his hand, once again, predicting their move. The oilnado caught fire and became a highly destructive firenado. Mojo Jojo became infuriated.

Mojo Jojo told Buttercup to use a giant water sprayer on the firenado, but the Alien Leader switched out the pipes with a tank of gasoline, only fueling the firenado. Mojo Jojo had to admit defeat. None of his plans were working and The Alien Force was enacting all of the plans that he originally wanted to do. Mojo Jojo screamed and cried, having absolutely lost it, all because he was letting this supervillain drive him insane. The Powerpuff Girls gave up on Mojo and decided to try and take down The Alien Leader themselves, once again. However, after just one attempt to attack him, The Alien Leader whipped out another laser blaster and blew them all out of the sky.

Although he succeeded at taking down his enemy, Mojo Jojo failed at being seen as the most evil villain, because after Mojo had saved Townsville from The Alien Leader, people cheered his name and praised him for his grand, courageous, and life-saving heroism. Mojo Jojo once again, fell into a fit of rage, as he had now sullied his name, and become notoriously recognized as a really good superhero. 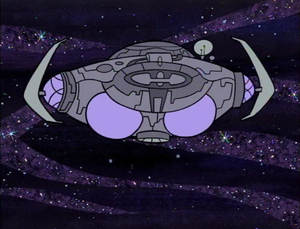 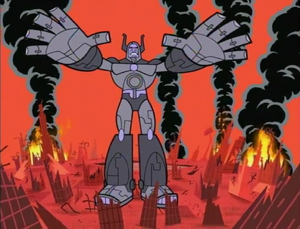