Alien Nackle is a sadistic alien that has appeared as an antagonist in several Ultraman installments, starting with Return of Ultraman.

Alien Nackle appears in episodes 37 and 38, where he comes to Earth seeking to take control of it.

Nackle disguised himself as an old man upon his arrival on Earth. He revived the monsters Seagorath and Bemstar and sent them to fight Ultraman Jack so he could observe his abilities. After their deaths, Nackle sent out his bodyguard, Black King, to distract MAT while he stole one of their vehicles. Nackle then decided to psychologically torture Hideki Goh, the host of Ultraman Jack. Nackle killed his friend and girlfriend by running them over with a car.

With Jack's spirit destroyed, Nackle had Black King attack Earth. Jack attempted to fight the monster, but his attacks proved useless against its armor. Nackle soon showed up to assist Black King. Nackle had two of his ships take Jack back to his home planet so he could be executed. However, Jack was rescued by Ultraman and Ultraseven and had his power restored by them.

Back on Earth, Nackle hypnotized MAT under his control and, upon his return, Goh was captured by his MAT comrades. However, Yuriko managed to avoid the mind control and rescued Goh. Goh then transformed into Ultraman Jack and destroyed the mind control dish controlling MAT, freeing them from Nackle's control

Jack then battled the alien duo, decapitating Black King before moving on to Nackle. Jack tossed Nackle into the air, slammed him to the ground and broke his spine. Dying, Nackle told Jack that one of his weapons still remained and would destroy Japan, laughing as he dissolved.

Alien Nackle appeared as one of the monsters serving in the Guar Army.

An Alien Nackle formed an alliance with Alien Temperor, Alien Zarab and Alien Guts to unseal Yapool and U-Killersaurus. He assisted Guts in battling Mebius and the Ultra Brothers. Nackle and Guts trapped the Ultra Brothers and weakened Mebius, allowing them to break U-Killersaurus' seal. Mebius managed to regain his strength, however, and destroyed Guts. Despite this, Nackle managed to release U-Killersaurus and Yapool. However, shortly after being unsealed, Yapool had U-Killersaurus destroy Nackle, as Nackle and his allies had been nothing more than pawns to him.

After locating Rei, Nackle had Galberos create illusions of Zetton to fight Rei and his Gomora, planning on use them to wear out Rei and Gomora. As soon as they were rendered unable to fight, Nackle sent Galberos to finish them off. However, Reimon manages to enter Burst Mode and transformed Gomora into Reionic Burst Gomora. Outclassed by Gomora's new power, Galberos was destroyed. Reimon then had Gomora destroy Nackle with a Super Oscillatory Ray.

Alien Nackle appears as a member of Ultraman Belial's 100 Monster Army. He teamed up with Alien Babarue, Alien Magma and Dada to kill Rei. However, Rei transformed into Reimon and destroyed the four aliens.

An Alien Nackle named Gray served as one of Dark Lugiel's minions.

Two Alien Nackles appear in this series. One is a peaceful Nackle named Nackley and the other is a arms dealer named Bandero.

Bandero came to Earth seeking to capture Xio's spark dolls, sending Black King to delay them. However, he ended up diverting his attention from the Spark Dolls to assisting Black King in fighting Ultraman X. However, Ultraman Zero arrives to assist X and Nackle and Black King flee, bring Rui with them. 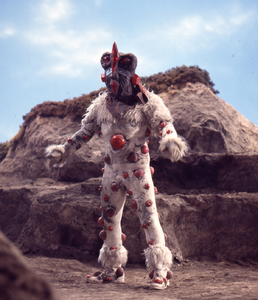 Alien Nackle's first appearance
Add a photo to this gallery
Retrieved from "https://villains.fandom.com/wiki/Alien_Nackle?oldid=3532497"
Community content is available under CC-BY-SA unless otherwise noted.