Destroy the Land of Light.

Conquer and control all of galactic civilization.

Alien Temperors are a hostile species of aliens and the sworn enemies of the Ultras. They seek to take control of the entire galaxy.

They first appear in Ultraman Taro in episodes 33 and 34 and have appeared in many Ultraman installments since then.

Two alien Temperors seeking to destroy the Land of Light came to Earth to fight the Ultras newest member, Ultraman Taro. The superior Temperor sent his subordinate to attack a city to lure out Taro. Taro attempted to lure the Temperor out of city, not feeling confident about fighting it due to its powerful weapons. ZAT also tried to attack the alien invader, but their weapons proved ineffective and they were rescued by Zoffy.

Taro later fought against the Temperor again, and destroyed it by shrinking to human size and flying inside its mouth before growing giant while inside.

However, the lead Temperor revived his subordinate soon after his defeat and had him continue his mission. Taro fought the Temperor but his attacks had no effect on it, so he used the same tactic he had used before to destroy it. The subordinate Temperor was revived for a third time by his superior following this.

The Ultra Brothers later assisted Taro in fighting the Alien Temperor, throwing him into the air so Taro could use his Neo Storium Ray to destroy it. The lead Temperor tried to revive him again, but he was killed when his ship was blown up by the Ultra Brothers.

An Alien Temperor came to Earth alongside three other aliens (Alien Zarab, Alien Guts and Alien Nackle) seeking to free the U-Killisaurus and Yapool. Realizing that Ultraman Mebius could thwart their plans, Alien Temperor decided to go fight him, declaring himself the leader of the four aliens.

The Temperor went down to Earth to fight Mebius, battling him both on the ground and in the sky before landing in the sea. Eventually, Temperor was defeated by Mebius and destroyed by his Mebium shoot. Temperor's fellow aliens mocked the alien's failure and did not care about his death. However, they were rather pleased that they managed to gather data on Mebius from his fight with him.

Alien Temperor appears in this film as one of the members of Ultraman Belial's 100 Monster Army. He fought Gomora alongside several monsters and later battled Ultraman Zero. He was killed by Zero's Zero Wide Shot. 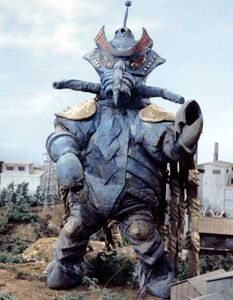 Add a photo to this gallery
Retrieved from "https://villains.fandom.com/wiki/Alien_Temperor?oldid=3659889"
Community content is available under CC-BY-SA unless otherwise noted.