Attacking Ultraman Mebius and his friends

The Alien Union are a quartet of alien invaders serving as the secondary antagonists of the movie, Ultraman Mebius & the Ultra Brothers. They come to Earth seeking to release U-Killersaurus so they can use it to conquer the planet.

The four members of the Alien Union were originally normal aliens until they were corrupted by Yapool. After being imprisoned by the Ultra Brothers, Yapool had the aliens come to Earth to further his scheme.

Declaring himself the "leader" of the group, Alien Temperor went to fight Ultraman Mebius to prove his strength, though this also allowed the other three aliens to collect data on Mebius. After Temperor was destroyed, Alien Zarab went to poison the host of Ultraman Mebius, Mirai Hibino, so he could pretend to be Mebius and ruin his reputation. However, Mirai managed to recover and Zarab was destroyed by Ultraman Mebius.

Alien Guts then made his move, crucifying Mebius to lure out the Ultra Brothers. Though Mebius was freed by the Ultras, Guts and Alien Nackle reveal this was all part of their plan, as they crucify the Ultras so they can use their energy to revive Yapool and U-Killersaurus. The Ultras were later saved by Mebius, who killed Guts, though this did not prevent Nackle from unsealing U-Killersaurus. Now free and having no more need for the Union, U-Killersaurus killed Nackle, revealing him as nothing but a pawn. 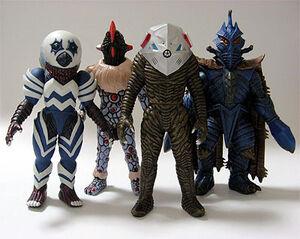 Retrieved from "https://villains.fandom.com/wiki/Alien_Union?oldid=3532501"
Community content is available under CC-BY-SA unless otherwise noted.