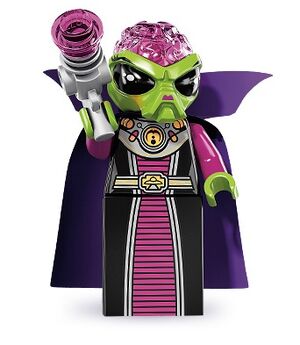 The Alien Villainess is a Minifigure released in 2012.

She wears a dress, a cape, and appears to have makeup on. She resembles the Alien Commander from Alien Conquest but has a trans pink "brain" rather than a green one.

With a name far too regal (not to mention too long and too unpronounceable) to mention here, the Alien Villainess rules over a vast interstellar empire devoted to one thing and one thing only – total universal conquest! From her towering citadel on the Imperial Throneworld, she sends out fleets of flying saucers to every corner of the galaxy, ordering the commander of each to invade and conquer any planet they find.

From the top of her pulsating purple brain to the tips of her tentacles, the Alien Villainess craves nothing less than absolute control over all of outer space. That’s why it’s so annoying when people try to stop her, especially that pesky Intergalactic Girl who keeps arriving at the last minute, escaping her brilliantly inescapable traps and messing up her plans. Don’t they realize that the universe would be so much better if only everybody would swear eternal allegiance to her?

Retrieved from "https://villains.fandom.com/wiki/Alien_Villainess?oldid=3523226"
Community content is available under CC-BY-SA unless otherwise noted.