Disguising himself as an Ultra.

Alien Zarab is an alien that has appeared as an antagonist several times in the Ultraman franchise, first appearing in the original Ultraman TV series.

Alien Zarab first appears in episode 18, where he creates a toxic fog over Tokyo and then removes it prove himself a friend of humanity. He later imprisons the host of Ultraman, Shin Hayata, and disguises himself as Ultraman before returning to Earth to cause havoc, hoping to sow discord between the various human governments. However, the real Ultraman returns to Earth and exposes the impostpr Ultra as Zarab before killing him.

An illusion of Alien Zarab was later created by Alien Mefilas in episode 33 as a demonstration of his power.

Alien Zarab formed an alliance with Alien Temperor, Alien Guts and Alien Nackle to kill Mebius and release Yapool and U-Killersaurus. After Temperor was killed by Mebius while completing Phase 1 of the plan, Alien Zarab was sent to complete Phase 2. He became Imitation Ultraman Mebius to attack the city of Kobe. He was exposed by Ultraman Mebius before being destroyed by the Mebium Shot, but not before he completed Phase 2 of the plan.

Zarab kidnapped Haruna of the Pendragon crew and disguised himself as her to infiltrate ZAP SPACY. He is exposed as a fake after the real Haruna returns. He then transforms into Imitation Ultraman to attack ZAP SPACY, but is fought off by Rei's Gomora, who reveals Zarab's true form. Zarab then retreats.

Alien Zarab appears in this movie as a minor, but important antagonist. Assuming his Imitation Ultraman guise, Zarab fought off the guards at Ultraman Belial's prison and freed Belial. Providing Belial with the Giga Battlenizer, Alien Zarab attempted to form an alliance with the evil Ultra to conquer the universe. However, not wanting to share the universe with anyone, Belial killed Zarab. 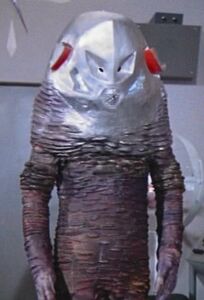 Zarab in his first appearance in Ultraman.
Add a photo to this gallery
Retrieved from "https://villains.fandom.com/wiki/Alien_Zarab?oldid=3532504"
Community content is available under CC-BY-SA unless otherwise noted.