Aliens are main villains of less-known, cancelled web series called Zayoby, later renamed into Żołnierze Przyszłości (Soldiers of the future.). Their motifs or origins are unknown, due to series cancellation.

Aliens are shown to act almost human-like, having funerals, clothes, churches, priests and even culture. Some of them are wild and feral in nature, such as Jumping aliens. They also apparently believe in hell, because General's mother mentions it once. They are voiced mainly by series author, with the exception of gunmen having author's voice sped up and reversed, and Sweaters which shout parts of "HEYEAYEAYEAYEA" song, slowed down. 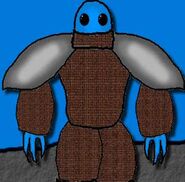 One of Sweater aliens. 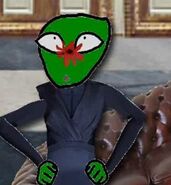 Jumping aliens.
Add a photo to this gallery

Series creator made a new episode, announcing reboot of series. It is unknown however, that it will reveal origins of aliens.

Retrieved from "https://villains.fandom.com/wiki/Aliens_(%C5%BBo%C5%82nierze_Przysz%C5%82o%C5%9Bci)?oldid=3247489"
Community content is available under CC-BY-SA unless otherwise noted.