The Aliens are the supporting characters in the animation Agamemnon Counterpart, a web animation by Michael and Jason Covac that was published to YouTube on June 13, 2006.

Several different styles of alien appear in Agamemnon Counterpart. The first is a yellow, humanoid alien which appears to resemble a distorted human male with large, red lips, a blue shirt and brown trousers, which appears to be constantly seated in a lotus position. Alongside the yellow alien are bluish, spherical aliens with a single red eye and numerous tendrils, which appear in large numbers and are roughly half the size of the yellow alien.

Midway through the short, a third alien appears. This alien is capable of flight, and appears to resemble a hybrid between a dragon and a jellyfish, with a perpetual scowl, numerous tendrils extending from below its body, several jaws, and an ornate, multicoloured pattern across its face.

In footage found on a mysterious tape from Planet Earth, an animation depicting what appeared to be an episode of a children's television show was present. Entitled 'Let's Make a New Friend', the animation began with the yellow alien and one of the blue aliens hopping towards the camera. As more of the blue aliens joined the duo, alongside an eyeless human, who appeared to be the 'friend' mentioned in the title, the yellow alien suddenly detached his head, which rose high into the air while its mouth flashed in multiple colours. All the while, the sound of screams could be heard, growing increasingly louder.

The dragon alien then descended from the sky, with an angry expression. After a pause, it began shooting beams of light out of its mouth. The screen flickered back and forth between the yellow alien and the human, whose eyes were now with copies of its own head where its eyes should be. A voice could be heard in the background, no longer screaming, but laughing instead. As the footage grew increasingly unstable, the final scene commenced, showing the human standing alone in a distorted landscape as ominous music played. 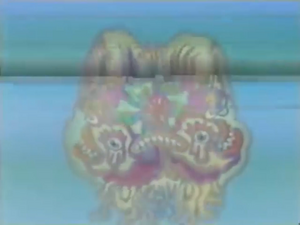