Killing everything in their way.
Following the female's scent.

Mate with the single female to populate their species.

Kill Moses and his gang (both failed).

The Aliens are the main antagonists of the 2011 British science-fiction comedy horror film Attack the Block. They are a race of hostile extraterrestrials that appeared from meteorite cocoons falling from the sky, intending to populate the planet Earth to their own intent.

During their mug on Samantha, Moses and his gang witness a meteorite fall from the sky and hit a nearby car. Walking over to investigate, Moses is attacked by a pale alien which scratches his face. It runs off when he stabs it with his knife, and he and his gang chase it to a warehouse and kill it. After taking the corpse of the creature to the top of their tower block, they spot more meteorites falling throughout South London. They arm themselves up, believing that killing more of the creatures would bring them a fortune.

However, these aliens are much larger and vile than the one they first encountered. One of the aliens eats Moses' dog and they pursue the gang. When Moses is arrested by policemen, identified as Samantha's mugger, two aliens kill the officers and trap Moses and Samantha in the police van, but are scared off by the gang throwing fireworks at them. The gang use the vehicle to drive away, only to crash into Hi Hatz's car. The gangster instead shoots an alien that mauls one of his gangsters, allowing the gang to escape.

In the peril to get back to the Wyndham Tower and avoid the aliens, Biggz is forced to hide in a recycling bin and Pest is bitten on the leg. While taking refuge in Samantha's flat, an alien bursts in her room and Moses kills it with a samurai sword. The gang moves upstairs to another flat owned by Samantha's friends, believing their security gate will keep them safe. The aliens instead smash through the window from outside, one of which bites Dennis' head off. After the girls and Samantha kill the two aliens, they kick the gang out of their room, where they are once again attacked by Hi-Hatz and flee when more aliens approach. One alien corners Hi-Hatz and his henchmen in an elevator, but only Hi-Hatz emerges alive.

Making their way up to Ron's room, the gang use fireworks to distract the aliens. However, Jerome becomes lost in the smoke while following Brewis and is killed. Upon making it to Ron's flat, the gang is once again cornered by Hi-Hatz, only for the aliens to smash through the window and kill the drug lord. The gang retreat to Ron's weed room where the corpse of the pale alien is displayed.

Meanwhile, the alien that trapped Bigzz in the pin is defeated by Mayhem and Probs using a water-gun filled with petrol and a flare to torch the creature to death. In the weed room, Brewis discovers the mating pheromone that the female released on the gang's clothing in ultraviolet light. He comes up with a plan to use the pheromone as a way to lure the males and insists Samantha be the bait, as she has not been stained with the pheromone. She manages to make it past the males into Moses' flat and activates the gas oven before escaping the tower block.

With the dead female strapped to his backpack, Moses runs out of Ron's weed room and guides the males toward his flat. He throws the female into the gas-filled kitchen and ignites it with a firework before jumping out the window. The explosion detonates and engulfs the flat and the aliens, but Moses survives by clinging to a Union Jack flag hanging outside his room.

The aliens fly through space in cocoons resembling meteorites that search for habitable planets. Upon landing, the single female of the pack emits a pheromone that attracts the males in order to mate and propagate their species on the planet. Their body shape resembles quadruped gorillas with sharp claws and fangs. They lack eyes but are very sensitive to smell and sounds. The males have dark fur and glowing neon turquoise fangs. The females are pale and hairless, as well as smaller and weaker compared to the males. While apparently mindless with no other objective than to just breed, the aliens are extremely aggressive and vicious creatures that will eagerly slaughter everything in their way to reach the female.

The males climbing the side of Wyndham Tower block.

The males screeching at Hi Hatz before killing him. 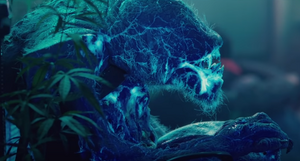 The dead female covered in the ultraviolet pheromone. 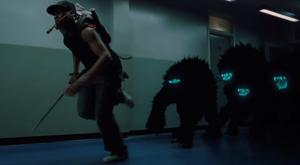 Moses using the female's corpse to guide the males to his gas-filled flat.
Add a photo to this gallery
Retrieved from "https://villains.fandom.com/wiki/Aliens_(Attack_the_Block)?oldid=4096870"
Community content is available under CC-BY-SA unless otherwise noted.