Various (depends on the race and every single alien)

The Aliens are the recurring antagonists of Calvin and Hobbes. They usually appear in Spaceman Spiff's adventures, as well as in Calvin's daily life.

There are various races and types of aliens (e.g. Zorgs, Graknils or Gurls), that are different in every comics strip. They are all big, ugly monsters with long tentacles and clawed hands and feet. Some of them are fat and rough-skinned, the other ones remind insects or dinosaurs more.

Their archenemy is Spaceman Spiff, a space explorer and Calvin's alter ego. He often bumps into aliens while exploring planets and then usually the battle begins. Unfortunately for Spiff, aliens are strong and have various weapons, so they often defeat Spiff and take him to their base. They try to examine him (but it is unknown what informations they want to know) and when Spiff refuses to talk, they torture him by various methods and instruments, for example by washing his hair or forcing him to eat disguising food. One race also tries to sacrifice Spiff to appease the evil god Nollij.

Calvin himself is sometimes kidnapped by aliens. They once take him into their spaceship and brainwash him, so he forgets all the Math he has every learned. Another time, aliens kidnap Calvin and replace him on Earth with a robotic duplicate of him. The duplicate behaves mischievously: he steals cookies, breaks a lamp with a shovel and throws Calvin's homework in the garbage. When the real Calvin is finally released, he has serious troubles with his mom.

Calvin also sometimes tries to call aliens, for example, he once writes "UFOs! LAND HERE!" on the roof with Christmas lights. The reason why is to get aliens' spaceship in exchange for his parents as slaves.

Some aliens seem to be quite stupid. Calvin and Hobbes once meet Nebular Galaxoid who wants to take over Earth for its good atmosphere. Calvin pretends to be the leader of Earth and trades Earth for 50 alien tree leaves he needs for his school project tomorrow. The duo of aliens leave Earth and later return with leaves. Later in winter, they come back to Calvin's house, complaining about cold snow they didn't know about while buying Earth. Calvin and Hobbes eventually give them Calvin's Christmas stockings to warm them up.

Actually, aliens are nothing but the people from Calvin's life. He often imagines himself as Spaceman Spiff who fights evil aliens that are normal people in fact. They are usually Calvin's parents, Miss Wormwood (Calvin's teacher) and Principal Spittle (the principal of Calvin's school). While daydreaming, Calvin sometimes attacks the other people, believing they are aliens. For example, he once attacks Miss Wormwood with a rubber band and then escapes from the aliens' base (the school), only to caught by another alien (his mom).

Calvin himself believes his parents are actually "space alien freaks" masked as humans who landed on Earth to enslave Calvin. Every morning, Calvin sees how unreliable their masks. While walking, his "parents" are slow because of Earth's gravity. They also don't prefer TV or fried food, so they can't be humans.

Spacesman Spiff is kidnapped by aliens 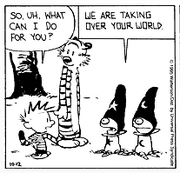 Retrieved from "https://villains.fandom.com/wiki/Aliens_(Calvin_and_Hobbes)?oldid=3669378"
Community content is available under CC-BY-SA unless otherwise noted.