The green alien
The blue alien

To spy on the people of Earth (successful, later sabotaged)
To kidnap the child (successful)

The Aliens are a pair of kidnapping spies that appear in the Cyanide and Happiness skit: "Alien".

The blue Alien is voiced by Mike Salcedo.

The skit begins with a little boy pointing to what appears to be a hispanic man wearing a sombrero. His mother punches him in the arm and tells him not to say that, but the camera zooms in on two aliens in the sombrero, panicking that they'd been found. They press a Botton and make their ship fly away, dragging the man across the ground. An after credits scene shows the aliens coming back and abdicating the child.

Both of them seem to be very intelligent, being able to pilot their advanced technology. They also appear to enjoy taking place in spying, disguising themselves so that they can observe the Earth's people. 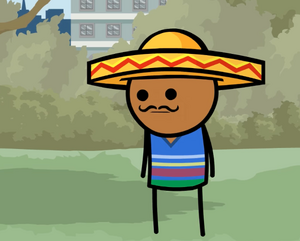 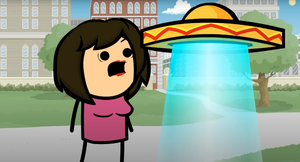