Insectoid Aliens
The Aliens (commonly known as Biters) are the main antagonists of the construction and management simulation game Factorio.

These insect-like creatures come in three forms: Biters, Spitters and Worms. They occupy the planet "Nauvis", the same one the player crash lands on, starting the events of the game.

It is possible through the use of game settings to turn off enemies completely. Playing the game on a "Deathworld" has more enemies and nests at the game's start.

Due to the "no story" nature of the game, the origin of the creatures is never touched upon. The only obvious fact is that they originated from the planet Nauvis, an Earth-like planet.

The goal of the game is for the player to build a factory, then use that factory to build a rocket to escape the planet. The aliens, however, add immense difficulty to this task, as they will not only relentlessly attack the player, but destroy any of the player's buildings they can reach. Because of this, the player must dot their factory with many defenses, including turrets and walls.

Simply going near these aliens will cause them to give chase, or if you put buildings too close to them. They can also evolve quickly, and can do so even faster the more pollution is generated from the player's buildings. Killing enemy nests also increases the evolution factor the fastest. As the game progresses, the enemies get larger and spread their nests around faster. Because of this, each attack on the player's factory will slowly get more and more difficult over time, meaning the player must up their defenses with time to compensate for this.

Biters and Spitters will spawn from their own respective nests. These nests can produce aliens indefinitely, so the player must destroy them to stop anything spawning them. This also lessens the chance of any future attacks on the player's factory. If aliens are attacking any buildings, a warning sound will be heard, as well as the location of the attack's origin on the mini-map. This warning also occurs if any turrets are engaging the enemy.

Worms, unlike the other two enemy types, do not have nests of their own, but still spawn near the nests of other enemies. When enemies evolve and get stronger, the player must use stronger and stronger weapons over time. This includes crafting better ammo types later in the game. The two highest evolutionary points of a Biter, called the "Big Biter" and "Behemoth Biter", are able to attack objects one tile past a stone wall. This means players should add extra layers of walls when these enemies enter the game.

Being insect-like creatures, the aliens do not speak or seem to communicate in any way, but blindly act as allies to each other as they attack in diverse groups and never attack each other under any circumstance. They are violently and openly hostile to all players and are extremely territorial. They also despise any pollution created from buildings, and will attack the specific buildings causing it if the pollution becomes too great for them.

The "morality" of the creatures is questionable. The creators of the game have changed the appearance of the enemies over time to make them more "cute", to "make you feel bad for intruding on their home planet". This, combined with the enemies' attacking patterns and reasons, it can be assumed that the creatures only attack out of self-defense and/or self-preservation.

The Biters and Spitters usually don't resort to attacking someone alone unless provoked. If any of their nests are destroyed, nearby enemies that are not currently attacking something will quickly escape to the nearest nest, assimilating themselves with the aliens from said nest they just reached. 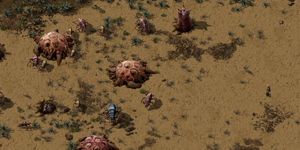 The player among some Biters, Spitters and nests. 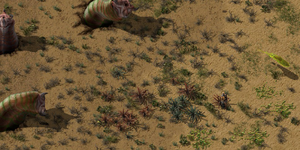 The player among attacking Worms. 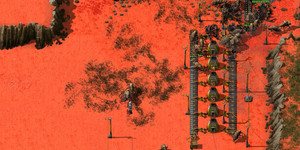 Both the player and their buildings getting attacked. 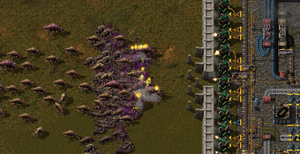 A line of gun turrets making short work of enemies.
Add a photo to this gallery
Retrieved from "https://villains.fandom.com/wiki/Aliens_(Factorio)?oldid=4226208"
Community content is available under CC-BY-SA unless otherwise noted.