Aliens (Fire in the Sky)

Fire in the Sky

Performing both vivisection and dissection.

Presumably to learn via brutal experimentation on living beings.

The Aliens are a group of unnamed creatures that act as the central antagonists of the 1993 sci-fi horror film Fire in the Sky.

While they are the main antagonists of the entire film they are actually told in flashbacks as the film focuses on the experiences of an alien abduction, nevertheless the aliens serve a pivotal role and are often seen as one of the more terrifying examples of aliens and the related abduction phenomena in cinema.

A scene in the film gives you a clue the aliens have been visiting the woods before Travis's abduction, when a news reporter on television tells of an Native legend to the mountains of evil spirits spirits frequented there on many occasions, dropping down from the sky and kidnap unsuspecting children, this gives the impression the so called evil spirits are the same aliens responsible for Travis's disappearance, and the native's living in the reservations nearby have encountered the same aliens beforehand, most likely by observing their craft hovering over clearings and snatching unfortunate victims who come too close or walked underneath it, and greatly fear them.

The aliens are part of an unnamed species that appear to be engaged in a long-running scheme of brutal experimentation on humans and possibly other species, while their appearance in the film is brief they nevertheless show themselves as a tangible threat and the protagonist must brave a torturous ordeal as one of their experiments and returning to Earth in order to share his experience with others.

It is shown that other people were not so lucky and unlike most depictions of alien abductions the aliens in this film were capable of outright murder as they were shown to have cocoons containing mutilated human corpses, with them having signs of dissection and dismemberment - their corridors are also littered with many items such as key, books, shoes, spectacles, and small trinkets, suggesting many unfortunate souls have been left to rot and die in the depths of the alien vessel. They're tools and equipment appear to be non sterile, dirty, and with visible dry blood stains.

These chilling clues followed by the brutal methods of experimentation and the aliens lack of care for those they abducted the practice of killing their victims was likely very common, unlike many other abduction-based species (who tend to abduct victims and then free them).

Despite all this, the aliens did eventually free the protagonist, albeit naked, mutilated and half-mad from his experience - leaving him in the wilderness. This shows that they do spare at least some of their victims.

The aliens in the film are depicted as hairless humanoids with features similar to those of the Grey - however, they have a more human-like flesh tone as well as more human-sized eyes, though they are pure black, their faces lack ears or noses but do have a human-like mouth.

The film shows that these creatures have access to spacesuits that closely resemble Greys, this suggests that the alien beings in the film are indeed Greys and the traditional appearance humans attribute to Greys are actually due to seeing these aliens inside one of their spacesuits.

While any physical, psychic or supernatural powers within the aliens are not explored, one extreme feature that is explored is their terrifyingly advanced technology, which allowed them to travel across space-time and abduct humans with ease: their technology is shown to be more bio-mechanical than most species, with vicious-looking machines merging with cocoon-like webbing and sticky fluids, all designed to capture and experiment on other life-forms. The aliens themselves though very slender in appearance, are yet incredibly strong, as seen are able to easily overpower and restrain a full grown man to a table platform tear his clothes off with no effort before covering him with a sheet which later subdues him to it like shrink wrap plastic with an unbreakable grasp.

The aliens are not able to survive in space, it seems, since they have a large room filled with specially designed spacesuits which strongly resemble what humans have come to associate with the classic "Grey" design of large eyes and silvery "skin". 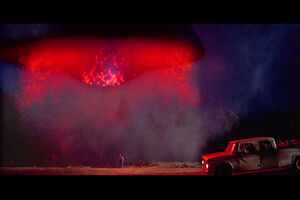 The "lead" alien, who oversaw the experimentation of the protagonist. 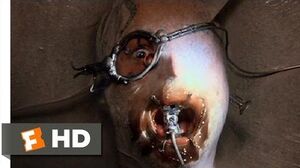 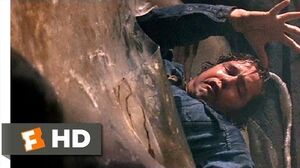 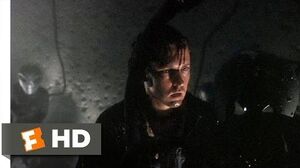