Control every humans on Earth. (failed)

The Aliens are the secondary antagonists of the 1998 Robert Rodriguez horror film The Faculty, with one of their Queens, Marybeth Louise Hutchinson, being the main antagonist.

The Aliens are aquatic creatures, although they are able to live out of water if they hydrate regularly. Much like insects, they have Queens, and are connected telepathically to her, meaning that if she dies, all the other aliens die too.

The Aliens look like small fishes or tadpoles, but they also possess tentacles. They have sorts of mandibles at their head and a mouth filled with sharp teeth.

The Queens are much bigger than their progeny, and a lot more monstrous.

The Aliens are also able to duplicate themselves in an unlimited way, and they possess limited shape-shifting abilities.

They are also practically immortals since they can survive even if they are cut into pieces. Even in human hosts they possess impressive regenerative powers, they are able to re-attach the host's limbs if they are cut off and can also survive to bullets and decapitations.

In addition, the Aliens are excellent swimmers.

The Queens are much more powerful than the other Aliens. They are able to give birth to many Aliens simultaneously, and they possess greater shape-shifting abilities, they can even change their size and turn into human. The Queens also have colossal strength.

The Aliens can't survive without water, therefore they constantly need to hydrate when they control humans. If their host is too old or ill, he eventually dies from dehydration. But their more notable weaknesses are the diuretic drugs, which are lethal for them.

The aliens' worst weakness is, they had telepathic connection with their Queen: Had a Queen dies, her progeny will die too.

The Aliens are native to a planet composed entirely of oceans. After their planet started to die, one of their Queens decided to go to Earth and to take control of it.

The Queen arrives in a small town in Ohio called Herrington and begins by infecting the Coach of the local High School, who later infects the rest of his colleagues. During the following days, the professors infect all the students, then everyone in town. They also try to infect people from other towns during a match.

However, a non-infected student manages to kill the Queen with a diuretic drug, which also kills the rest of the Aliens. 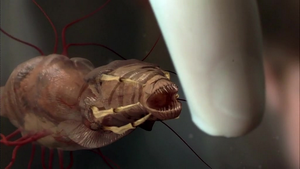 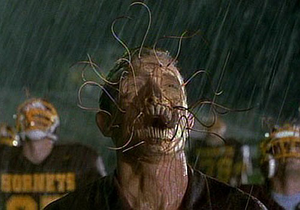 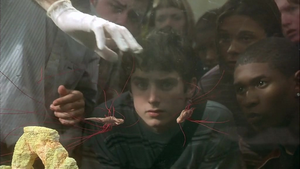 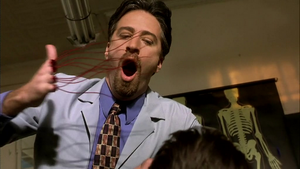