Infect and conquer the human race.

The Aliens are the central antagonists of the 1951 science fiction novel The Puppet Masters by the late Robert A. Heinlein and its 1994 film adaptation of the same name. They are a race of parasitic aliens.

These mysterious slug-like aliens arrived on Earth via a UFO and began to infest the human population via latching onto a victim's back and taking control of their nervous systems, turning them into slaves (hence the titular nick-name of "Puppet Masters").

A trio of government agents investigates these events and battle against the alien invasion, which becomes critical as the parasites spread rapidly and begin to infect military sent to stop them as well as numerous civilians.

It is discovered that the aliens share a hive-mind and are planning the complete domination of the human race, yet they are weak to electricity - which frees some of their victims and further investigation also leads the heroes to find some individuals whom the aliens can not possess.

This would play a part in defeating the aliens for good as biological warfare is applied, killing off the aliens - though it is unknown if more of these creatures exist off-planet. 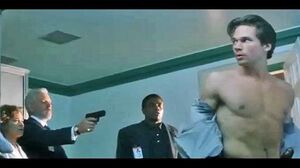