Killing people and taking their skins to disguise themselves.

The Aliens are the central antagonists of the 2012 sci-fi comedy film The Watch. They are a race of hostile extraterrestrial creatures who have come to invade Earth and kill the innocent people of Glenview, Ohio.

In the town of Glenview, Ohio, Evan Trautwig is a suburban resident who volunteers in the community and is the manager of a Costco store. But then his life changes when his friend, Antonio Guzman was murdered on his first day as a nightguard. The local police have no suspects and show no interest in investigating any further. Determined to find the killer and bring him to justice, Evan decides to form a neighborhood watch. However, he only manages to recruit Bob McAllister, a construction worker and overprotective father; Franklin, a high school dropout who dreams of being a police officer but failed the written, physical, and mental health tests; and Jamarcus, a recent divorcé.

While drinking and driving on patrol, they accidentally run over something. They discover some green slime and a strange metallic orb that acts as a highly destructive weapon when they insert their fingers into its holes. Meanwhile, several more townspeople are mysteriously killed. The watch responds to the murders and encounters an alien, killed Manfred Salisbury and attacks them. Evan seemingly kills it with a garden gnome before the group returns with the creature's body to Bob's house. The gang were playing with the body and taking pictures until the alien regains consciousness and escapes, stealing the metallic orb and warning them that they are already among them. The watch members realize that the aliens are stealing their victims' skins and disguising themselves as humans, so that anyone in Glenview could be an alien.

Later, Evan then receives an urgent visit from Jamarcus, who slits his hand to reveal the green slime which means he is one of the aliens but has chosen to side with humanity after experiencing the human culture. He warns the group that the aliens are building a transmitter beneath Evan's Costco store which will summon their armada to destroy the earth, starting in Glenview. After Jamarcus leaves the watch, Evan, Bob, Franklin, and Abby arm themselves and infiltrate the Costco to destroy the transmitter and save the world. The gang encounters Jason (Chelsea McAllister's ex-boyfriend) who reveals that he is also an alien, and they fight. Evan and Franklin make it to the transmitter, but are surrounded by the aliens. They start shooting at them, but the aliens seem unkillable. Jamarcus arrives and saves the couple. Finding out that the crotches were the aliens' brains are, he fires at the aliens' crotches, killing several of them. This gives Bob the opportunity to kill Jason by ripping off his penis. Evan discovers that the transmitter is powered by the metallic orb and removes it, disabling the machine. More aliens arrive, forcing the group to flee. The watch uses the metallic orb to destroy the Costco building, killing all of the aliens inside, ending their reign of terror for good. 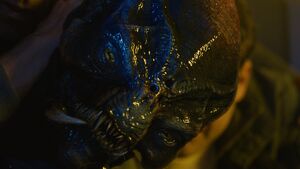 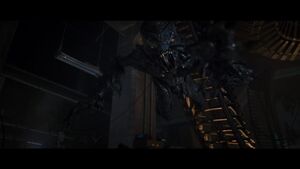 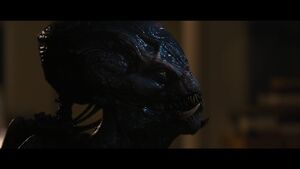 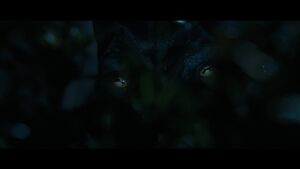 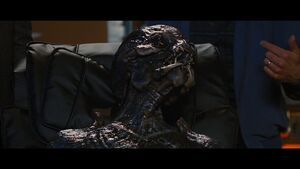