Alisha is a character and former survivor of the zombie apocalypse in AMC's The Walking Dead. She was also a member of Martinez's camp and a supporting antagonist in the first half of Season 4.

She is portrayed by Juliana Harkavy.

At some point during the time-gap between the third and fourth season, Alisha was found and recruited by Martinez and/or his other group members. Whilst at Martinez's camp, Alisha starts a relationship with fellow survivor Tara Chambler and is later seen when the group discuss about the leadership after Martinez' death. She sets off with Philip and the Chambler family when Philip convinces them to leave Martinez's camp for not being safe, but she came back with them after that. Alisha is present when a walker gets in the camp and almost kills Meghan.

Alisha is seen with The Governor's militia while The Governor talks to Rick. Once the shooting starts, after Hershel's head is cut off, she finds Tara hiding behind a car, and tells her to run off into the woods. Alisha is then seen again entering the prison grounds, and starts to shoot at Tyreese, who is hiding behind potted plants to take cover. After the man behind her is shot, she turns around to see Lizzie Samuels, aiming a gun at her. After a brief hesitation, Lizzie pulls the trigger, blowing a hole through Alisha's forehead and killing her instantly. 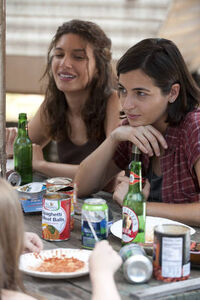