Keep his victims in his reality (both succeeded)

Alistair Covax is a minor antagonist from American Dad!. He's the show host of the fictional television show called "Night Hawks". More than that, he's a demonic being that has full control over the reality and kidnaps people from the real world to be used as extras.

He was voiced by Chris Pine.

In his normal form, he appears to be a normal middle-aged caucasian man with fancy clothing. In his demonic & true form, he has red robotic eyes and large grey hands. His teeth become pointed and his face becomes longer.

Alistair is a laid-back middle aged man who enjoys jazz. He's a natural host who takes pride in the perfection of his show. He enjoys a peaceful environment full of people who like to listen to jazz. He has a very calming voice and demeanor. In his demonic form, he's a feral beast who rips apart anyone who disturbs the balance of his show. Alistair's personality is typical to that of other hosts from the black and white era.

Alistair seems to have no problem with trapping people in his television dimension. He doesn't seem to understand why anyone would want to leave, as this is his ideal Heaven. People to him are just pawns, he has no problem with erasing their memories so that they can serve as his loyal background characters. He even plays games with his victims, luring them into a false sense of security before revealing that they're still in his possession.

Alistair will not tolerate anyone who disrupts the repetitive flow of his show. Anyone who tries to break free of his cycle will be torn apart without warning.

Control over his television reality - Alistair has the ability to control most aspects of the television reality. When Stan and Tuddle tried to escape, Alistair was able to make it appear as though they were in their world, having it down to every last detail.

Memory erasure - Alistair has the ability to erase his victim's memories during each rerun of his episodes. Slowly, they will forget about their lives and families. This is not a very strong ability, as key words can trigger their memories and make them remember.

Shapeshifting - Alistair has the ability to look like a normal human man. His normal form appears to be a robotic vampire.

Alistair is a demon-like entity that takes the form of a black & white era television host. He lives inside of a television reality that he has full control over. Over the years, Alistair has trapped many human victims inside of his realm to serve as background characters. He plays out the same episode every night perfectly, killing anyone who disrupts it.

After discovering a large television on the side of a street, Stan takes it home and sets it up in the basement. After turning it on later in the night with a prior failure, he is met with the show "Night Hawks" and Alistair as his host. Stan does not recognize this show, and after searching it up he gets no results. The next day he further researches the topic, but with little answers. He later finds a conspiracy organization with Tuddle as the host, and only other member. Later that same night, Stan finds out that Tuddle had been transported into the television reality. Stan works day and night until finally, he figures out that he can get in by jumping into the static being projected onto the wall.

After Stan arrives in the reality his appearance changes to suit the scene. Tuddle walks up to him and begins to regain his memory, which he had lost. He reveals that each rerun of the show, he looses his memory. He also reveals that they can't leave, even if they wanted to. Someone nearby overhears them and regains their memory. They try to escape, and the show ends. The guest is then wrapped apart while the lights are off by Alistair. The show later comes back on and Alistair wipes his mouth as he walks away from the scene.

The show continues with Alistair asking Charlie to play another song on the piano. He next appears next to Stan and asks him if he's having a good time. Stan asks where he is and Alistair replies by telling him it's a party. He tells Stan that parties are fun, and so while the camera is on him he is to make nice conversation with a drink in hand and to enjoy the jazz. Stan objects and says he wants to leave. Alistair is confused, saying he's with other "Night Hawks" and that Stan's a centralist. When Stan tells him that he has a family, he just walks away. Stan and Tuddle soon after devise a plan to escape through the elevator. They rush to it as it opens and get to a car. As they drive on, the color returns, and they eventually reach their homes. As they say their goodbyes they open their doors only to realize that they're still in the television reality.

For a while after, they stay in the reality, doing as Alistair wants them to. Time passes and they grow tired. Later, Alistair is giving a commercial for the camera. During the commercial, Alistair says fondue, and Stan begins to regain his memory, making a scene as he does. He pushes Stan into a wall, causing it to crack. He tells the camera that they're going to take a break, and when they return, everything will be bak on schedule. The crack that Stan's head formed revealed to have static behind it. Stan begins clawing at it, causing static to pour out. As he does, Alistair begins his transformation into a monstrous beast and goes after them. After Stan and Tuddle go through the static and escape the television, Alistair shoves his hand through the screen and grabs Stan's foot. He almost succeeds until Tuddle unblugs the TV.

Later, after Stan is reunited with his family, they start talking strange and he realizes he is still in the television realm. Alistair comes back to the screen during the credits to talk to the camera before it fades to black. 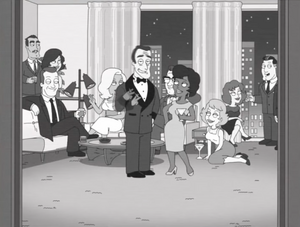 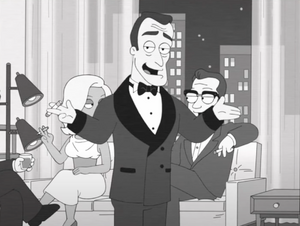 Talking to the camera. 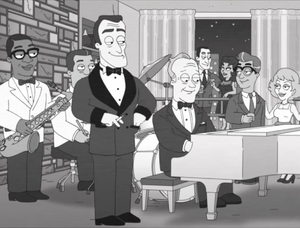 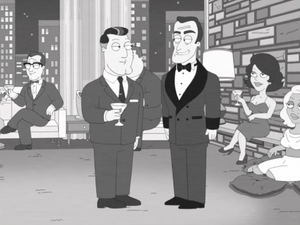 Talking to a guest. 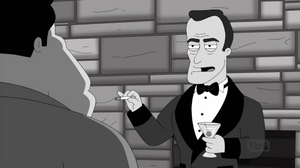 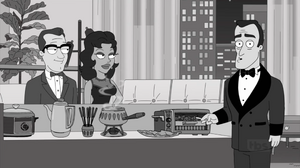 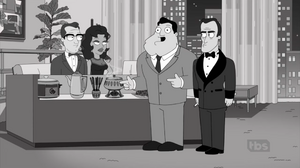 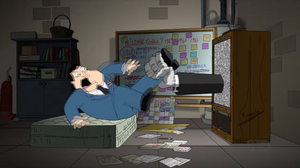