Alistair Patton is the main antagonist of Disney's 1988 Australian film Return to Snowy River, the sequel to the 1982 film The Man from Snowy River. He is the son of Patton Snr. who wants to marry Jessica by stealing Jim's horses.

He was portrayed by Nicholas Eadie.

Jessica is admonished for training a racing colt, and then told to put on "something more feminine". They are headed to a business meeting/horse race with Alistair and his father. It becomes clear that Patton and his son have more on their minds than business that day. Alistair awkwardly presents Jessica with an engagement ring. Jessica disappears quickly into the crowd without giving any formal answer to Alistair, just as Jim shows up. The horse race begins and the Harrison colt wins with Jessica as the jockey.

Harrison and Alistair swarm Jessica protectively and attempt to shoo Jim away, but he will not be so easily deterred. Only when Jessica tearfully rejects him and he is outnumbered 4 to 1, does Jim finally leave. On his way out, he manages to perfectly run through Alistair's series of cavalry tests using nothing but his bullwhip, his stirrup leather, and a wooden stake. With his son's ego on the line, Patton seeks revenge. He vows to "run off the mountain riff-raff and secure the grazing for the people of the valley". Back at home, Jessica starts to make vows of her own. One, she never wants to see or speak to Alistair Patton again. Two, Jim is the man for her. Daddy Harrison has a lot to deal with, seeing as how Patton is threatening to withhold a loan from him if the two families do not form a "merger". After her father tells her the Pattons' dastardly plan, Jessica realizes she must stay away from Jim. She tells Jim they cannot be together because the Pattons would destroy her father and then they would destroy them.

Jessica moves into Jim's house and immediately takes the reins of his horse breeding business. She and Jim propose a contract with Harry Hawker, to provide 100 quality mountain horses to the military every year. Not only would it provide much-needed income for themselves, but it would drive business away from the nefarious Patton family. Alistair Patton begins to formulate a revenge plan, but the mountains hold a little surprise for Alistair: a black horse named Stalker Brumby. Stalker Brumby kills one of Alistair's mob and the locals blame Jim and Jessica for the death. They give Jim a final ultimatum: kill Stalker Brumby and send Jessica home, or else. Meanwhile, Alistair hires a group of thugs to steal Jim's horses. Jim immediately saddles up Denny and heads out to rescue his herd. He jumps fallen trees and soars over ditches. He dives under fallen limbs. He makes the infamous leap until Alistair shoots Denny.

Harrison has also relented during this time, and he eventually joins with Jim and his friends to hunt down Patton and his gang. Jim Craig gets and wins his man-on-man duel with Alistair Patton, and Harrison gives his final approval for Jessica and Jim to marry. 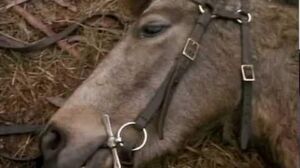 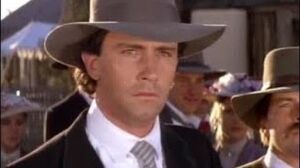 Retrieved from "https://villains.fandom.com/wiki/Alistair_Patton?oldid=3612880"
Community content is available under CC-BY-SA unless otherwise noted.